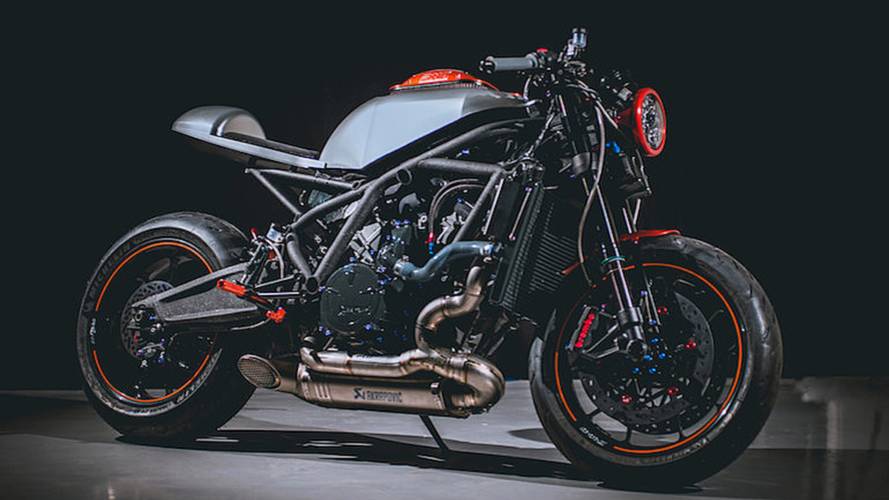 A Greek company delivers an absolute beauty of a cafe racer for EICMA 2017.

Transforming modern super bikes into cafe racers is almost always a bad idea. Not only are modern sportbikes packed full of unsightly ancillaries and countless yards of wiring, but today’s superbikes boast already gorgeous designs – meaning 99 percent of the time, turning one into a cafe racer just makes it worse. Enter the seldom-seen 1 percent, this time in the form of a beautiful yet minimalistic KTM RC8R cafe racer built by Dino and Marios Nikolaidis, the Greek father and son duo behind DNA filters.

Taking note of a rapidly expanding custom moto scene, the two decided to stir things up for EICMA 2017 and create a ridiculously cool custom build to show off at the renowned moto show.

It turns out Dino and Marios are the perfect team to take on an ambitious project such as the "DCR017" - a machine they also refer to as "The Brain Eraser." Marios is a seasoned motorsport engineer, Dino a mechanical engineer, and both are intimately familiar with CAD/CAM design. Add to this the fact that DNA Filter’s HQ happens to have myriad pieces of state-of-the-art equipment at its disposal, including some cutting edge CNC machines. The KTM RC8R is a pretty natural donor bike as it’s just about the only modern superbike without a full suite of electronic assists. This meant not having to find ways to hide as many of the wires and sensors that other bikes hide beneath their bodywork.

The DCR017 was built with a focus on simplicity,  the Greek duo aiming for a build that would harken back to the racers of the past.

"We wanted to mimic the style of the ’70s and ’80s. DCR017 was to be just a frame, engine, and wheels, with an analog clock - no plastic covers and no carbon fiber," said Dino. "We needed a tubular trellis frame and when we saw the RC8 naked we were blown away by the minimal, beautiful steel frame."

KTM famously wraps its bikes in steel frames, which is a rarity in today’s motorcycle world. Dino and Marios said months were spent on just figuring out the design of the build before any actual physical work began.

CNC machining is a common practice in the custom motorcycle world, but Dino and Marios took things a few steps further than most by CNC machining large parts, such as the tank and tail. They decided to use solid blocks of 5083 H112 grade aluminum with the tank being machined from a 320lbs block and the tail from a 130lb cube of the high-grade metal. The father and son team opted to keep in line with the theme of simplicity and leave the aluminum bare to show off the marks the milling machines leave on exposed metal. Though, a clear coat was laid down to prevent oxidation. Because of how expensive these massive aluminum blocks are, Dino and Marios only had one of each to work with.

Dino was primarily responsible for the front half of the bike - including the tank - while Marios handled the back end’s seat, under-seat area, and bespoke subframe. After tig-welding the fuel-pump and bottom plate onto the 11-liter fuel cell, the 2mm-thick aluminum tank ended up weighing in at less than 8 lbs. Because this bike was built for the purpose of marketing DNA Filter’s products, it made sense for the team to incorporate one of its filters to serve as a key focal point. This was accomplished by having one of DNA’s MK3 Stage 3 filters poking out from the top of the tank in what looks like something you’d see protruding from the hood of a hotrod (Or the skull of Yondu – CC). While the idea does sound questionable on paper, the end results look pretty stellar.

The tail section on The Brain Eraser may look like your average cafe tail, but there’s more going on than meets the eye. A two-piece subframe was constructed to seamlessly fit into the under-tail section, which connects to the rest of the tail without any visible bolts. Marios crammed the bike’s battery, relays, fuse box, and part of the RC8R’s wiring harness into the small hump. The motorsport engineer is also responsible for the build’s trick orange-anodized custom rear-sets which are fully adjustable and boast double-sealed bearings. As you can see in the photos this build sports a handful of other orange anodized bits as well.

The DCR’s headlight was another trick custom part. The anodized orange bracket and housing holds an LED unit with a built-in tilt-sensor, which allows the headlight to point in the direction the bike is going. Behind the headlight is an analog/digital instrumentation combo that’s also set in custom orange anodized housing. Despite the RC8R lacking the electronic assists found on other high-end modern machinery, there was still a ridiculous number of sensors and wiring that needed to be hidden. It took about three weeks of poring over schematics and diagrams to get it all sorted.

Because the standard RC8 wasn’t enough for Dino and Marios, they opted to use the R-spec RC8 as their donor. But seemingly this still wasn’t enough. On top of their MK3 Stage 3 Filter, a SBK-spec-tuned KTM Power Parts race kit was added to give the modern cafe even more power. The father and son team also got some official help from Akrapovic who supplied them with a one-off titanium exhaust that combines Akra’s Evolution 4 headers and a MotoGP end can, adding even more power. The end results: a roughly 350lbs machine that makes a cool 186 hp. Not bad. Dino and Marios weren’t done there, however; they also added an anti-hopping clutch, a quickshifter, a steering damper (on custom mounts), and the brakes got a complete overhaul.

"We wanted a 2017-spec superbike beast. But undercover - a sleeper," explained Dino.

READ MORE: You Need the KTM 1290 Super Duke GT in Your Life | RideApart

Now that the bike was almost complete, Dino and Marios began focusing on the small details and knickknacks that would finish off the build. A one-off aluminum fuel-cap was machined with DNA Filter’s logo engraved on it, along with a D-shaped key that was milled to unlock it. The bike is also turned on via the key but through the use of NFC technology. It really is impressive when you consider the massive amount of CNC machined parts on the DCR017. It probably won’t come as a shock to learn that more than 400 hours of machining went into this custom KTM. This is what I’d call a job well done.

Dino and Marios also had a short promo video for the build put together, which has been posted to DNA Filter’s YouTube channel.