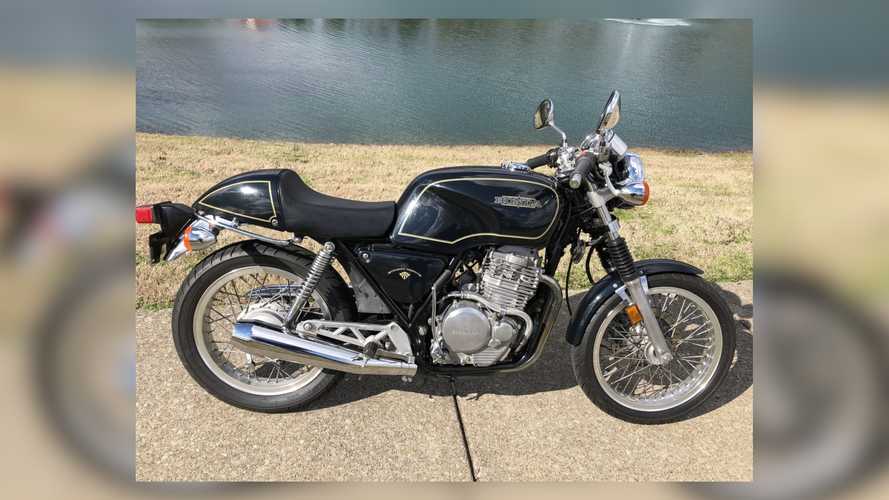 At first glance, you wouldn’t look at this Honda GB500 Tourist Trophy and think it’s exactly as old as my RC31. Although both bikes date from 1990, the GB500 was a different instance of Honda being way ahead of its time. In this case, however, Team Red jumped the gun by a few decades on building a pleasingly retro-styled bike with modern reliability.

Once you start to get deep into motorcycles, you tend to like what you like for Reasons. They can’t always be adequately explained or described, but they’re in your heart and end up guiding your every move. This GB500 has 22,000 miles on the clock, and is a beautiful green-black with gold pinstripes. It ticks all kinds of classic British boxes in its styling, and yet it’s a carbureted, air-cooled Japanese bike from 1990.

Other styling elements include spoked alloy wheels, a chrome rear fender, a black front fender, and chrome bullet turn signal housings. A two-into-one exhaust with a chrome megaphone muffler exits on the right side. The only minor cosmetic flaw seems to be that it’s unfortunately missing its fuse cover, which sits just under the instrument cluster and is quite visible in the photos. The seller says they’ve had problems finding another one, but perhaps the ideal buyer knows a guy who knows a guy, you know?

Strangely, the very nice-looking green-black with gold pinstripe color combo was apparently a U.S.-only color option. I won’t complain about us exclusively getting something nice that’s bike-related for a change, and I suspect you won’t, either. Suspension is 35mm conventional fork up front and dual rear shocks with adjustable preload in the rear. As for stopping, there’s a single hydraulic disc brake up front and an integrated drum in the rear. This bike has both electric- and kick-starters.

The 498cc single overhead cam single-cylinder engine produced a claimed 33 horsepower when new. It features a four-valve radial combustion chamber and a dual-port cylinder head, and makes use of a 42mm Keihin carburetor. Both a valve adjustment and a new battery installation took place in September 2019.

If you’re interested, this auction wraps on Friday, April 24, 2020. At the time of writing, bidding is up to $3,000. There’s no walkaround or running video for this listing, so unfortunately, we don’t all get to hear it while we’re looking at these photos.