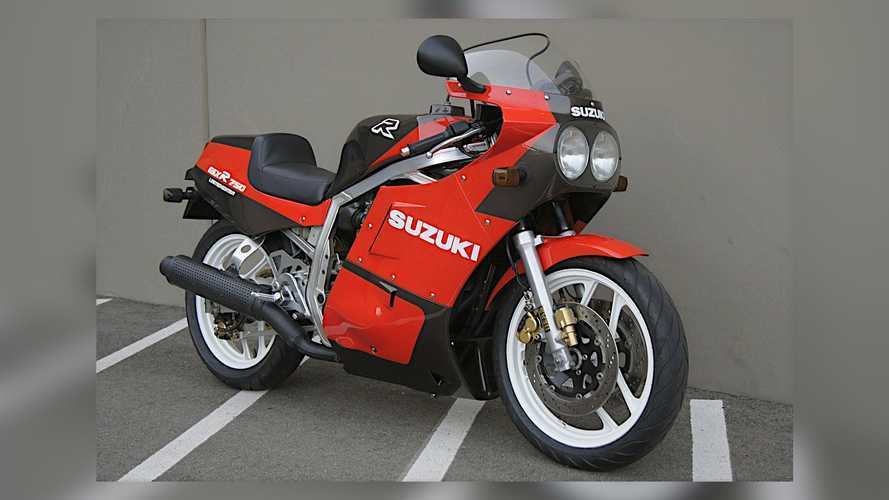 If you’re looking for a street-legal race bike from the mid-80s you could do a whole lot worse than this 1986 Suzuki GSXR750 Limited Edition. It’s one of only 150 Japanese Domestic Market examples ever made, and will arrive at its auction-winner's door bearing both a clean Washington State title and its original Japanese title.

By 1986, engineers at Suzuki had some experience producing bikes with aluminum frames, which was then a fairly new concept. As OEMs started to figure out how to make light, strong aluminum frames work, the problem came down to building non-steel frames that could handle significantly powerful engines.

By the time Suzuki’s engineers were done learning from their own 1982 Endurance World Championship-winning GS1000R XR41 to make the 1985 GSXR750, they produced a super-lightweight aluminum frame that did the job while weighing only 18 pounds. Sure, it cost around $100 more to produce per unit than the steel frame found in the 1985 GS750, but that seemed a small price to pay for having cracked this particular engineering mystery.

Homologation specials are always something to see, and two different versions of the 1986 GSXR750 Limited Edition were released in the U.S. and Japan. The Japanese version had that red and gray Yoshimura paint scheme, along with a fuel gauge and a headlight kill switch, tinted turn signal lenses, Japanese-spec city lights, flat slide carburetors, and a black four-into-one Ray Gun exhaust system.

Limited Editions in both markets had wide white split triple-spoke wheels, as well as a 41mm front fork that featured Suzuki’s New Electronically Activated Suspension/Positive Damping Force (NEAS/PDF, of course) anti-dive system, and a steering damper. The rear suspension featured a 1-inch longer swingarm than the standard one, with an aluminum-bodied monoshock that had a remote reservoir. Dual front full-floating 310mm rotors and a single rear brake setup provided ample stopping power for a bike that weighed around 423 pounds with oil (but no fuel). These bikes also had a dry clutch with a close-ratio six-speed gearbox and an adjustable clutch lever right out of the box.

This particular bike has around 7,000 miles on the odometer, and last had a service in December, 2019 that included both engine and fork oil changes, carburetor tuning, and replacement of spark plugs, air filter, drive chain, and brake pads. A brake fluid flush was also performed at this time. Sadly, there is no running video for this time-capsule beauty, but if you’re interested, this Bring A Trailer auction ends today, September 17, 2020, at around 2:15pm Central. Current bid is up to $8,000 at the time of writing.

Rare MV Agusta F4 Ago For Sale, But There's An Agostini Twist
++