This 1983 Suzuki XN85 Is A Bundle Of Turbocharged Joy 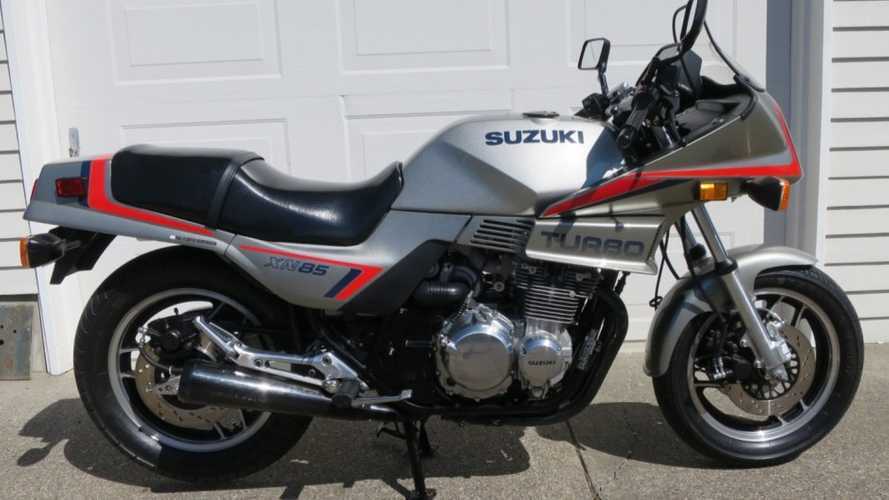 The 80s was truly an exciting time in the world of motorcycles. With the high performance sportbike craze booming, manufacturers were pushing the envelope in terms of radical new design and engineering innovations. In contrast with today’s crop of high performance machines, motorcycles of the 80s varied vastly in terms of engine configurations and styling characteristics.

Such is the case with the Suzuki XN85. Featuring a 673cc inline-four engine, you may be forgiven for thinking that it was just another four-cylinder sportbike. However, that 673cc engine had a little trick up its sleeve. Featuring an itty bitty turbocharger that kicked in at approximately 5,000 RPM under load, the bike made a healthy 85 horsepower and 56 ft-lbs of torque—decent figures even for today’s standards. The XN85’s mill also came equipped with piston-cooling oil jets and an external oil cooler, to ensure that the added heat generated by forced induction was kept at bay. Power was transferred to the back wheel by way of a conventional five-speed manual transmission.

This particular XN85 is from 1983, the only year this bike was imported into U.S. shores. Acquired by the seller from its original owner in 2008, the bike has not undergone a full restoration, but seems to be holding up against the hands of time pretty decently. The current owner hasn’t really racked up that many miles on this bike, as it has spent the better part of eleven years proudly on display in his collection. The bike however, is ready to roll having been serviced and regularly maintained, showing around 16,000 miles on the clock. For starters, a new air filter and spark plugs have been installed. Oil and other vital fluids have been flushed and replaced in preparation for the sale, as well.

The bike’s 37 year old brakes have also been refurbished with a front brake flush and a total rebuild of the rear caliper. Offered at no reserve, this XN85 comes with a factory tool kit, complete manuals and service records, and a clean Oregon title. With the current bid standing at $3,500, whoever manages to snap up this deal will undoubtedly have a prized piece to add to their collection, as only 300 XN85s were ever imported into the U.S.

How To Prep Your Motorcycle For Winter Storage
Husqvarna Introduces 2021 TE 300i And FE 350 Rockstar Enduros
Is It The End Of The Road For The Aprilia Dorsoduro And Shiver?
Triumph Speed Twin Gets A Sharp Look With Custom Rennstall Kit
The Royal Enfield Meteor 350 Finally Gets A Launch Date

How To Prep Your Motorcycle For Winter Storage
Husqvarna Introduces 2021 TE 300i And FE 350 Rockstar Enduros
Is It The End Of The Road For The Aprilia Dorsoduro And Shiver?
Triumph Speed Twin Gets A Sharp Look With Custom Rennstall Kit
The Royal Enfield Meteor 350 Finally Gets A Launch Date
Commenting Guidelines
Sign In or Sign Up
© 2020 Motorsport Network.
++