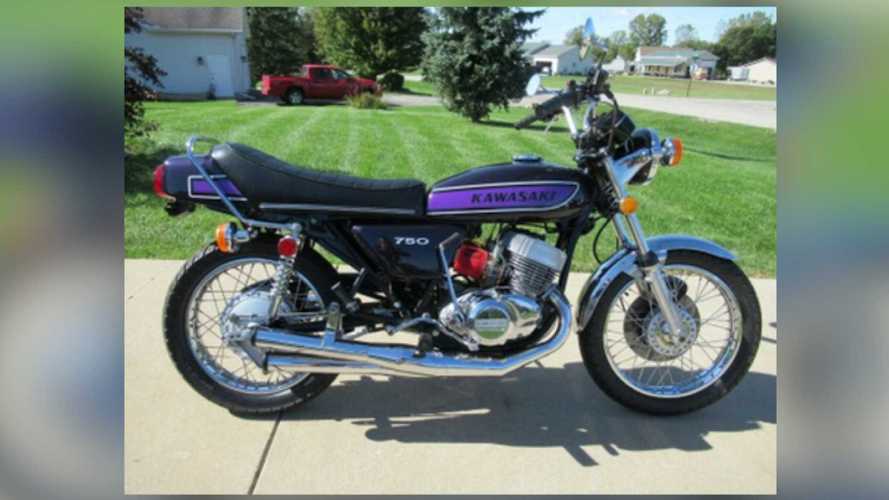 This bike is the grandfather of the now iconic Supercharged Kawasaki Ninja H2R.

The Kawasaki H2 750 Mach IV was a superbike before superbikes were even a thing. Introduced in 1971, the H2 Mach IV featured a 748cc two-stroke inline-three engine producing 74 horsepower and 78 Nm of torque. Back in 1971, these figures were astounding. In fact, the Kawasaki H2 750 Mach IV could complete the quarter mile from a standstill in under twelve seconds crowning it the first motorcycle of the time to complete the quarter mile under twelve seconds.

It went form zero to sixty in just five seconds, and had an extensive list of optional parts to make it perform even better. For instance, the H2 Mach IV was offered with just one disc brake upfront. However, Kawasaki offered a second disc brake as an optional extra to help stop the bike faster. They also offered an upgraded capacitor discharge ignition system (CDI), a hydraulic steering damper, and a chain oiler for the bike.

What Does Kawasaki Have In Store For Us?

Looks Like Kawasaki Is Tempted To Make Its Own Tesi H2
⠀

Watch The New Kawasaki ZX-25R Sprint Into Action At Jerez

This particular Kawasaki H2 750 Mach IV is a 1974 model, and resides in Opelika, a city in Alabama in the USA. It appears to be in excellent condition and is claimed to have been fully restored in 2016. The bike is said to have been so meticulously restored that every single nut, bolt, and washer was given attention. The current owner and seller will provide each and every single receipt and record of the bike's service history. All this amounts to a gargantuan thirty six page service booklet. Since its restoration, the bike has one 1,614 miles (the odometer was zeroed out upon restoration).

The 748cc triple was also completely rebuilt and features chromed and polished cases, a new crankshaft, connecting rods, Wiseco pistons, seals, and all bearings, washers, gaskets, and nuts. All these restoration and modification efforts have in fact bumped the bike's stock power from 74 horsepower to nearly double that: a claimed 130 horsepower to the rear wheel. As such the seller cautions potential buyers, stating that this is no beginner bike. Heck, not even the stock 74 horsepower H2 Mach IV is a beginner bike in my book.

The seller goes on to elaborate that the bike has been well taken care of, never being left out in the sun, or under heavy rain. It spent its life with him in his air conditioned showroom, and definitely looks like it's been well looked after. As such the asking price of $11,000 seems pretty reasonable. Although I'm sure there's some wiggle room in there. Nonetheless, this would make a tasty addition to a classic motorcycle enthusiast's collection, and a spritely ripper on weekend rides.

The current generation line of Kawasaki H2 motorcycles, in the form of the Ninja H2 R, its road going sibling the Ninja H2 and H2 SX, as well as the newly released Z H2, can be considered a renaissance of the legacy left behind by the Kawasaki H2 750 Mach IV. In many ways, the Mach IV was considered a sleeper motorcycle, in a sense that it bore all the trademark characteristics of most all docile universal Japanese motorcycles (UJMs) of the time, yet packed a punch that was next to unheard of at the time.

In many ways the current line of Kawasaki H2 motorcycles provide the same experience, albeit with more than three times the power output, for the H2R, and more than double for the H2, H2 SX, and Z H2. The rider's safety is, however, somewhat ensured by a slew of high tech on board electronic aids such as lean sensitive ABS, traction control, and adjustable suspension to name a few.