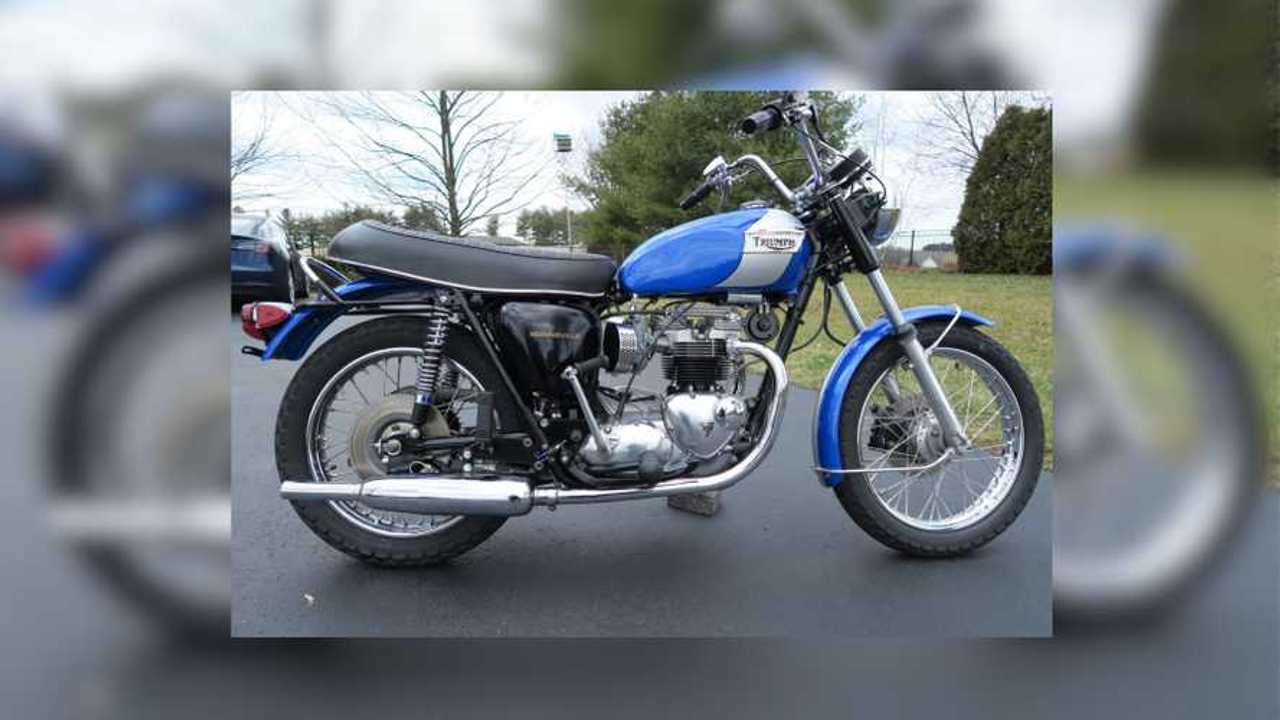 A restored classic with a clean Pennsylvania title is up for sale.

However, the Bonnie finds its roots in much simpler applications. Starting life in 1959, it was designed solely as a standard street motorcycle known for its parallel twin engine. Over the years, the Bonneville was imitated but never replicated—although some say the Kawasaki W800 is extremely close. Needless to say, the Triumph Bonneville has a place in motorcycle history.

Fans of said history now have the chance to bring home a relatively fresh, newly restored 1970 Triumph Bonneville T120R. This particular unit was acquired by the current seller approximately one year ago. Restored inside and out, this bike has been repainted in blue and silver—a quirky homage to the fact that the bike was stored under a blue tarp for years prior to its restoration. The frame was restored and powder-coated in black. The original engine was replaced by a 750cc parallel twin boasting a complete rebuild with new internals and cylinder heads. A five-speed transmission delivers the power to the rear wheel.

The electronics are also in check, as the seller has replaced the wiring harness, gauges, and lights. A Boyer electronic ignition system has also been fitted. The bike runs smoothly thanks to a new clutch, wheels and tires, as well as refreshed suspension parts.

To give the bike a bit of modern performance, as well as a bit more safety, a rear disc brake conversion was performed. Of course, all wheel bearings and head bearings have been replaced as well.

The current owner seems to be a pretty meticulous individual since he has apparently documented the entire rebuild process in great detail. Along with the bike and all its replacement parts, the buyer of this motorcycle will receive a binder full of photos of the rebuild, as well as a stack of invoices for most, if not all replacement parts and labor. Lastly, this Triumph Bonneville T120R is registered with a clean Pennsylvania title under the current owner’s name.

The bike however, isn’t perfect and some signs of its age have yet to be addressed. For instance, the top right side of the oil tank has a ding, and is starting to show signs of corrosion. Also, eagle eyed readers would have noticed that this bike has a 750cc engine, as opposed to the 649cc parallel twin found in the T120R. The replacement engine is said to have come from a 1976 T140V—a sizable demerit for purists.

Nonetheless, despite its imperfections, the restoration of this bike seems pretty extensive. It wouldn’t be surprising if this bike could slug it out on day-to-day commutes. The bike is on sale for just $5,000.