You Can Own This Police Model Harley-Davidson Servi-Car 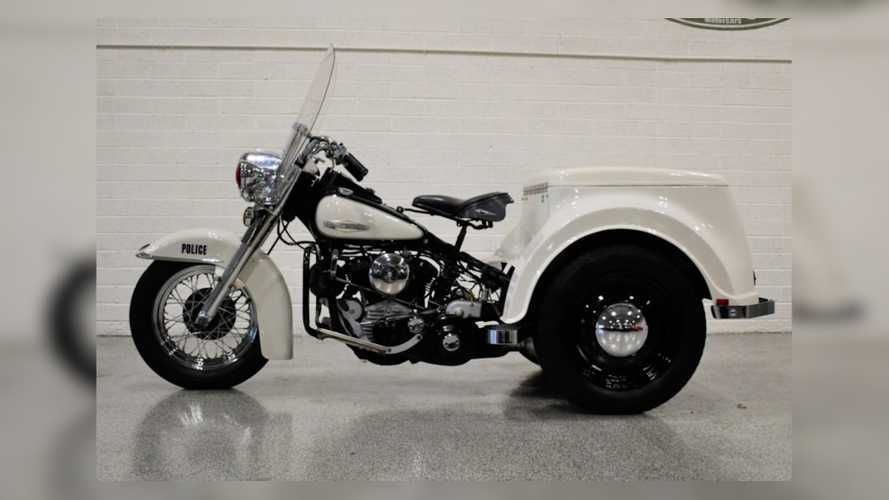 Just imagine giving pretend parking tickets to all your friends.

Some people might think factory-made Harley-Davidson trikes are a relatively new thing. Those people have never heard of the Servi-Car. We can bet they’ve seen one, though.

After two failed attempts to find a niche in the commercial market, first with the motorcycle truck in 1913, and then the package truck in 1916, Harley finally found success with the Servi-Car. The first Servi-car was built in 1932 and featured an R-series, side-valve V-twin. In later years, they would be equipped with a 45-inch flathead.

You Could Win This Vintage Harley Flat Tracker In A Raffle

It went on to become Harley's longest produced motorcycle— finally going out of production in 1973. While it was intended for and used by many different types of businesses, the Servi-car became especially popular with police departments. They were often seen being used by parking-enforcement or traffic control during parades or to escort funeral processions.

Now you can have a police-model Servi-car of your very own. Up for auction is a 1970 police model Servi-car originally used by the Torrance, California, police department. After Torrance PD retired it from service, the old Servi-car was bought by the same dealer who originally sold it to them. After he bought it, he refurbished it and put it on display at the Hutchins Harley-Davidson museum. It remained there until the current seller bought it five-years ago.

This late model Servi-car features a 45 cubic-inch engine and a three-speed manual transmission with a hand-shifter. It comes equipped with a fiberglass cargo box mounted over the rear wheels. It’s believed to have been refurbished once by a previous owner. While the odometer on the 85mph gauge reads seven miles, the actual mileage is unknown.

The bike comes with its original registration card and a clean California title. Current bidding stands at $5,500 at the time of writing this article. Bidding ends on April 16, 2020. If you’d like to place a bid on this machine, click here.