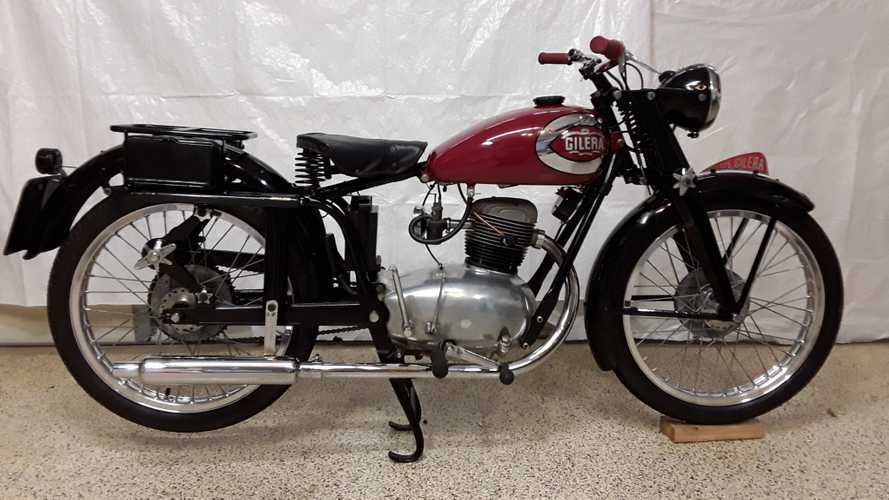 Giuseppe Gellera entered the motorcycle game in 1909 by founding his company, Gilera, in Milan. You’ve probably heard of people looking like their pets over time, but Gellera did something similar when he formally changed his own name to ‘Gilera’ in 1939. Would he change the world the same way with his creations? He certainly tried, and this beautiful 1949 Gilera 125 Turismo on Bring A Trailer is a lovely example.

A 125cc air-cooled four-stroke single-cylinder engine powers this spry 70-year-old machine. It was serviced in spring 2019 and made an appearance at the 2019 Geneva Concours d’Elegance (that’s Geneva, Illinois, not Geneva, Switzerland). It also won a “Best European” award at Chicago’s 2019 Vintage Motorcycle Show, according to the seller.

Incidentally, the current seller purchased this bike himself from a 2018 BaT auction, and has put all of 30 miles on the clock since taking ownership. He’s offering it with no reserve, and the auction ends on January 27, 2020. Currently, the price is $1,200.

The bike does start, as evidenced in this video, but the single Dell’Orto carb probably needs a rebuild. Hey, it could be worse—it could have six carbs, right? The seller also put brand-new 19-inch spoked Borrani aluminum wheels and Duro tires on this beauty in 2019. It’s sat in storage since the spring of 2019, peacefully biding its time.

This bike is a Gilera-Gilera, not a Sears-rebadged-Gilera, of which many were sold to the American public between 1953 and 1970. As you might guess, Gilera lived a lot of lives over its lifetime. However, by 1969, the company was in serious financial trouble, and eventually ended up being bought by Piaggio. Since that time, the Italian giant has put out some scooters and small-displacement bikes with the Gilera name, including this remarkably odd CX125.