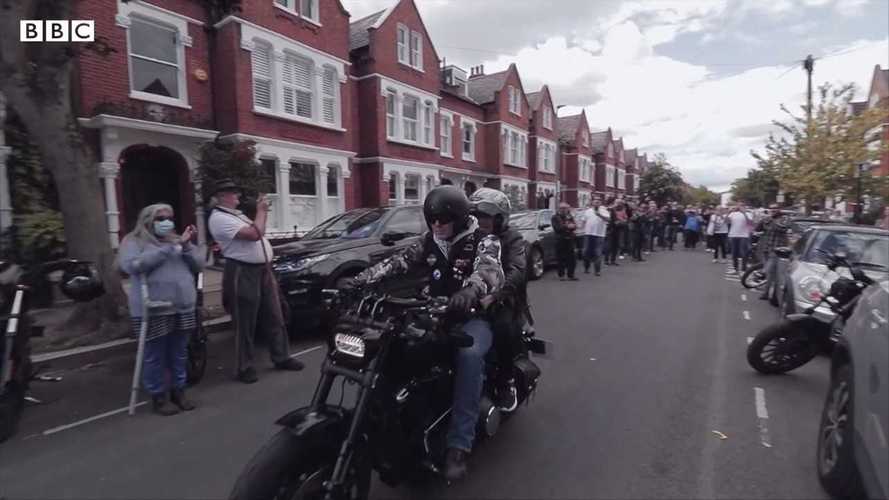 No matter where you are in life, time is strange. It rarely goes by at just the right speed, does it? Very often, it’s much too slow when you’re going through something difficult, and much too fast when you’re having a good time. Unfortunately, none of us know how much time we’re going to get on this Earth—and that’s just a fact we all have to live with.

Anne Turner is a terminally ill 83-year-old woman who lives in England. She and her daughter Rachael got the word out to bikers in their area that she really wanted the chance to sit on a Harley-Davidson sometime before she died. Obviously, sooner rather than later would be ideal, since the end could conceivably come at any time.

As the BBC reported, many more bikers showed up to grant Turner’s wish than she’d expected. She said she thought maybe three bikers might show up, but instead had a whole group rumbling up and down her street, parking to let her bask in all that two-wheeled glory in such a relatively small space.

When the time came, Turner did indeed get her wish—along with an added bonus. As most people reading this are well aware, sitting on a bike is cool—but actually riding it is, of course, a much better experience.

After Turner was appropriately outfitted in a fringed leather jacket and helmet, one Fat Bob owner took her for a very careful ride around the block on the back of his bike. She even got a T-shirt afterward to cement the experience forever. “I’m one of them now,” she told the BBC.

We of course think it’s great whenever anyone gets to experience the joy of motorcycles, because we believe that motorcycles are for everyone—no matter who they are, and no matter what age they are. Everyone’s life works out a little differently, and maybe you can’t make it happen as soon as you’d like for a number of reasons. No matter what, we hope that if it’s your dream to ride, you find a way to make it come true.

How Harley Created The ADV LiveWires For The Long Way Up
⠀