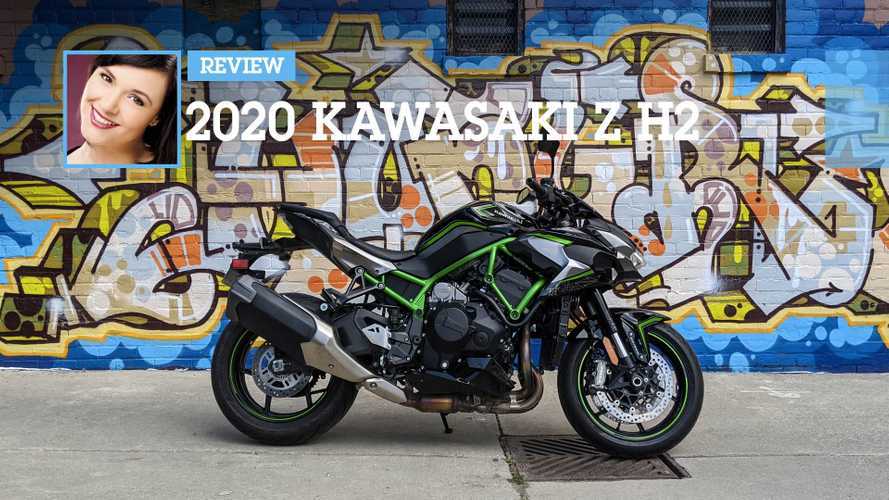 Before picking up the all-new 2020 Kawasaki Z H2, I couldn’t help but feel a bit intimidated by the bike. There’s something slightly daunting about the whole “supercharged motorcycle” affair and this is coming from someone who’s been riding for 15 years. I’ve been on powerful bikes before and have tremendously enjoyed the experience but then you add “supercharger” into the mix and you gain a whole new level of respect for the motorcycle involved.

In my case, it was never about the amount of power but rather about the delivery and the behavior. After all, this bike was going to be my only mode of transportation for the week and I honestly half expected the bike to be like a wild horse, trying to buck me off every time I twisted the throttle.

Putting the Z H2 on the track seems like the most natural thing to do. Unless racing is what puts bread and butter on your table, however, chances are that you’ll simply commute or enjoy the occasional weekend joyride like most of us do.

Is that something you can actually enjoy doing on a 200-horsepower motorcycle? That’s the answer I sought to answer when I booked the Z. We already know the bike does well on the track but how does it handle the good ol’ “everyday life”?
Then I actually sat on it, took off, and that’s when I was reminded that this is Kawasaki: it's good at what it does.

Ok, I’m going to start a little strong here but bear with me. I don’t like the look of the Z H2. The massive head cluster directly attached to the body makes it look like a recoiling turtle. An angry turtle, granted, but a turtle nonetheless. The flyscreen is pinned to the top of the semi-fairing like it's an after-thought. Plus, for a bike with such sporty aspirations, that’s an awful lot of muffler to deal with. The silhouette lacks the Ninja H2's brutal yet harmonious design.

The worst part is that, in my opinion, the bike looks better in pictures than it does in person. To be fair, the Z follows the same aesthetic guidelines as Kawasaki’s other Z models. I suppose I should own the fact that while I think Kawasaki’s Z line is an absolute hoot, the look simply doesn’t do it for me.

The contrasting green tubular frame and 17-inch wheels with a green pinstripe are redeeming qualities—green is my favorite color so it does soften my opinion a little bit. It’s a small silver (green?) lining but it’s better than nothing.

That’s obviously purely subjective and I’m assuming that people willing to pay to own one will find charm in what I think is a clumsy appearance. Don’t they say that beauty is in the eye of the Zee-holder?

Perhaps the most surprising thing about the Zs in general is that, despite their mean looks and aggressive styling, the riding position is overall relatively comfortable, as far as sportbikes go. The H2 is no exception.

Of course, you need to like a sportier stance with the feet kicked back slightly and positioned higher up on the frame with the knees almost at the same height as the saddle, squeezing the bulk of the fuel tank. Because the Z has a standard handlebar instead of clip-ons, however, you’re not leaned in, putting all your chest weight on the wrists and hands. The fuel tank’s pronounced arch serves a higher purpose: that of creating a reach that’s comfortable and leaves some flexibility in the elbows.

You don’t get to shift in the saddle much but the shape—narrower toward the front and wider toward the back—cradles the bottom while clearing the space for the thighs to drop and stay close to the frame.

I don’t know if I would go as far as to say I’d travel on the Z H2 but I probably would anyway, purely out of curiosity and for the irony of touring on a naked supersport. After all, the Ninja flagship is a lovely touring machine, I can’t see why the Z—H2 or not—wouldn’t be. After all, the bike comes with standard cruise control—if that doesn't scream road trip, I don't know what does.

This bike has an incredible potential but the power delivery is far more accessible than I anticipated. The power curve is smooth and gradual rather than fickle and spiky. Of course, the acceleration can be as bonkers as you wish it to be, but you’ll never feel out of your depths. The bike works with you not against you and you remain in control for as long as the throttle is open. The engine’s performance is muscular and fast but not wild and untamed.

You just have to be willing to let it rev freely. I found the gear changes a tad bit choppy below the 8,000 rpm mark—don’t worry, the bike can take it, the redline is set at 12,000rpm.

Now, something interesting about a supercharged engine that I wasn't familiar with and anyone in the same position will be introduced to is what a colleague adorably referred to as the “6k flutter”. That is the sound created by the supercharger's turbines when they rapidly decelerate. You'll normally hear the tweeting when you change gears and such. If your first thought hearing that is to worry that something’s wrong like I did, don’t, it’s perfectly normal.

I found the suspension to provide a pretty standard sporty type of support, the kind that’s firm and responsive but without the kind of stiffness that reverberates through the frame and make you smash your teeth together when you encounter a bump. The damping does a great job of not making you pay the price of a bad road surface without sacrificing on the handling.

The brakes perform reasonably well—I say reasonably because while the front one is as bitey is you expect it to be, the rear one is on the softer side. I would have liked a slightly more aggressive set up at the back wheel but I say that about a lot of bikes and I'm often alone in my boat. What can I say, I like a brake pedal with good resistance.

At 527 pounds, the bike isn’t exactly lightweight and that’s something you feel when you need to walk the bike out of tight corners like I have to do to get the bike out of my parking. Once you get going, however, those 527 pounds turn into a well-grounded, sure-footed, easy-to-manage mass that doesn’t get in the way of your fun. On the contrary, I’m pretty sure it contributes to it.

The bike is stable, there’s no front wheel wiggle even at highway speeds, the steering is nimble and precise, and like you can tackle any curve at any speed and it will gladly follow. It’s one of those bikes that gives me all the confidence in the world to take on bends at speeds I could otherwise find a bit ambitious. It’s built for speed and agility despite being “naked” and it shows.

What more praise can I give a bike without sounding like a complete sucker, at this point? Kawasaki applied its H2 formula to its streetfighter lineup and it just worked. The result is a good, accessible, and fun-to-ride bike and it's hard not to be a little excited about it. Intimidating who?

Kawasaki manages to skirt the line between exciting and wild. The Z H2 is an exciting bike with power to boot and a peppy personality but the whole thing is delivered in a package that won’t make you fear for your life or your license.

This is a good execution of a bike people will likely want to take on the track but also live their daily life with—unless they have $17,000 to put on a weekend-only ride.

I usually have no qualms being blunt about things I don’t like but in this case, aside from the bike's looks, I can’t say that I found any real flaws with the new Kawasaki Z H2. Granted, I didn’t test and push its limits on the track, but I personally was more interested to know what it could do on the daily. To answer my initial question about whether or not it’s possible to enjoy a daily commute on a 200-hp bike, I’ll have to say yes. This Z was a delightful surprise and not at all the wildcard I expected it to be.

It’s definitely not beginner’s friendly—I’d get a few years of experience under my belt before opting for this kind of purchase. For any other (more seasoned) rider who was concerned about their undying lust for a model they expected to be unmanageable, I recommend you discover it for yourself, if only to hear that quirky 6k flutter.