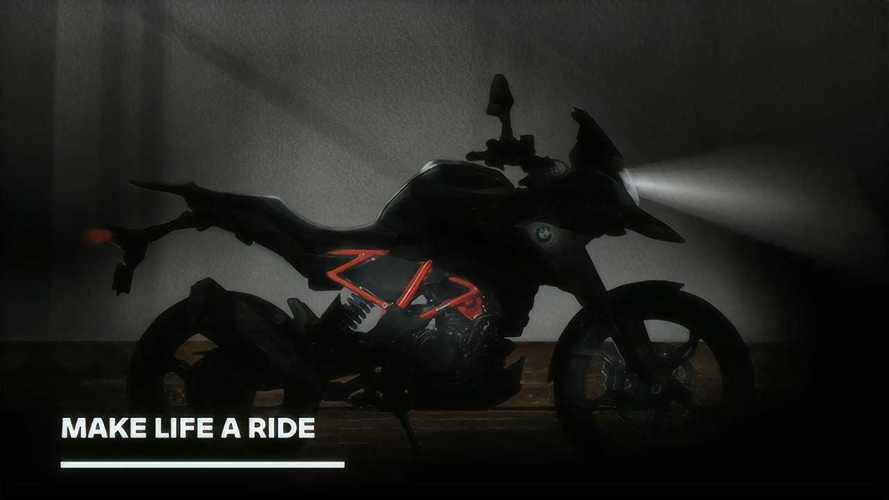 While BS6 standards went into effect in April 2020, the coronavirus made BMW delay the release of the BS6-compliant G 310 R and G 310 GS until normal production could resume. To help bide the time, we’ve speculated potential improvements to the platform and pored over spy shots of the twin singles in the wild. Now, ahead of a full reveal, BMW Motorrad India is giving us a shadowy peek of the new baby Beemers and opening bookings for test rides.

Teaser images released by the Bavarian brand show the familiar profile of the two models with several elements highlighted to catch the viewers' attention. With the gas tank, tail section, and motor cloaked in darkness, one can’t miss the contrasting orange-red paint on the trellis frame. The color choice not only piques our interest in the new bike’s chassis, but calls to mind BMW’s rival, KTM, and the competing 390 Duke and 390 Adventure.

Of course, the BMW roundel receives a small spotlight, but the rest of the bike’s design is left to the imagination—including the new BS6-compliant exhaust system. Though many expect the G 310 engine to receive an update to meet the new emissions standards, most manufacturers also alter the exhaust system to maximize efficiency. Comparing the silhouette of the 2019 and 2020 models, updated pipes aren’t very evident. There isn’t a larger silencer slung under the tail nor a massive breadbox tucked under the belly of the 310s.

However, BMW also released equally shadowy head-on images of the two small-capacity bikes with additional text declaring the new R and GS as “Refined. Renewed. Reenergized.” With a flurry of speculations surrounding the launch, the brand only stokes the fires of potential upgrades to come. From LED lighting to a digital instrument cluster to throttle by wire, there’s no shortage of new component conspiracy theories out there.

While aggravating and anxiety-inducing for consumers, BMW’s tactics only keep us coming back. Like a cliffhanger before a commercial break or a timeout before the buzzer-beating shot, BMW India only amps up the drama by teasing the G 310 R and G 310 GS before its complete launch. Will it get a new engine? Will we see new bodywork? What colors (aside from orange-red) will it come in? Like the rest of this saga, stay tuned, we’ll find out soon enough.

Who You Calling Pipsqueak?