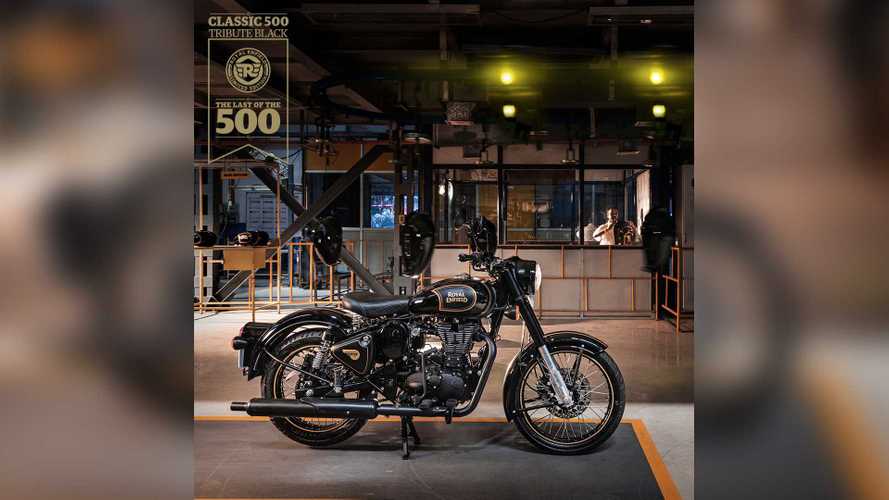 Early in 2020, Royal Enfield announced that its lineup of 500cc models would be discontinued and pulled from the Indian market by the time Spring rolled in. The 500s have been around for over a decade and notably helped the Indian manufacturer solidify its presence outside of its local market.

To celebrate a decade of success, the House of Chennai introduced the Classic 500 Tribute Black Edition, a special model limited to a 1,000-unit run. The Tribute Black initially launched in India and Royal Enfield now announced that it was heading to Europe, officially marking the end of the road for the 500s in that market as well. A batch of 210 bikes will go to the U.K., no numbers have been announced for continental Europe yet.

The special Classic 500 features, of course, the outgoing engine, the 499cc, four-stroke single rated at 27.5 hp and 30 lb-ft of torque. The model is clad in black and decorated with golden pinstriping on the tank, side covers, and wheels. It also features a straight peashooter muffler, a quilted single-rider saddle, and blacked-out mechanical components (engine cover, cylinder heads, etc.) for that all-black look.

In the U.K., the model is priced at £5,499 (US$7,270) and comes with a special individually numbered commemorative plaque.

New Enfields In The Works:

For its global market, Royal Enfield plans to focus its energy on the Continental GT and Interceptor 650 Twins and on the Himalayan—its most popular models abroad. As for the Classic and Bullett 500, the bikes will continue to sell in Europe until the units run out. Stocks won’t be replenished once they do.

What about the U.S.? We reached out to Royal Enfield to know whether the Royal Enfield Classic 500 Tribute Black Edition will come stateside. They confirmed that, as things currently stand, there is no plan to bring the special edition to North America. We have yet to receive a confirmation as to whether the 500s will be officially pulled from the market here as well.