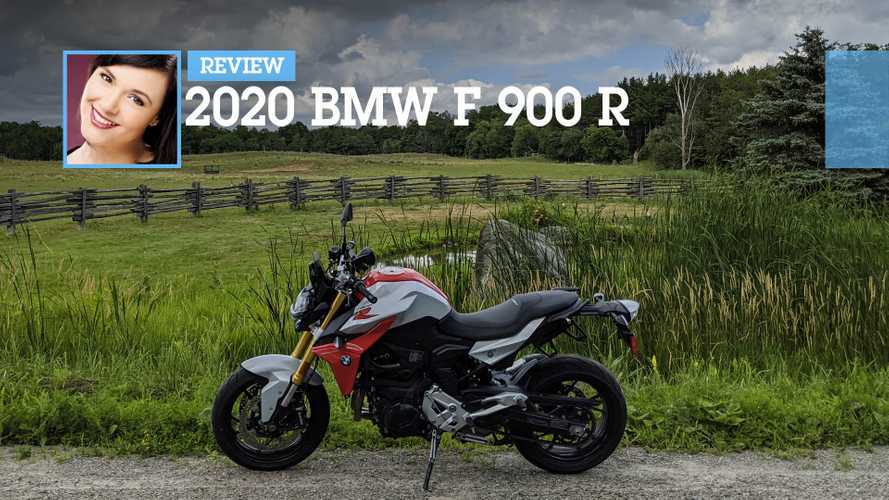 Is a 900cc motorcycle a good starter bike? (My first bike was an 850cc Yamaha triple. A++, would recommend –JM) I took the all-new 2020 BMW F 900 R out for a proper ride on a sunny Tuesday afternoon, and as I sat at a traffic light, forming an opinion about the bike I was sitting on, hat’s the thought that naturally occurred to me.

I immediately thought the connection was demented—there’s no way a bike this “big” should be put in the hands of a newly-licensed rider. Or should it?

After handing the bike back to BMW and letting all the thoughts I had about it settle, I decided to read what colleagues had written about the bike to see whether I was alone in my “pro-beginner” boat or not. It turned out I wasn’t. “Novice, beginner, first-time-buyer" is only a sample of the lingo used to refer to the new 900’s target audience. Based on a bit of info a colleague over at Driving.ca gleaned from a conversation with BMW Motorrad’s Product Manager Vinnie Kung, at least fifteen percent of F 800 buyers are beginners—a third of which are women.

Well, well, well. Not so demented after all.

It might not make complete sense for a new rider to choose an 800cc bike as their starter—let alone a 900cc—but it also kind of does. Take the 900’s predecessor, the F 800 R, for example. With its mild-mannered ways, 439-pound figure, and saddle height of 31.5 inches, the 800 turned out to be a tamed and approachable introduction to riding while also offering riders a chance to grow before wanting something “more”. At a price point of $9,995, the model ultimately had all the makings of a decent starter despite the seemingly hefty displacement number.

The F 800 R and its XR twin’s main weaknesses? The 798cc twin they used was underwhelming and didn't meet the impending Euro 5 emission standards. So, the House of Munich sent its twins back to the drawing board and took the opportunity to up the ante on the performance front to give its mid-rangers a little extra oomph. In November 2019, BMW introduced the all-new 2020 BMW F 900 R armed with a new and improved parallel-twin, more aggressive ergonomics, and a price tag slashed by $1,000.

The F 900 R is a serious improvement over the 800 from a design standpoint. Even though BMW still uses a fair amount of plastic in its design to help keep things affordable, the bike now looks sharper and more sophisticated. Designers “dressed” the bike up a little more with the addition of semi-fairing components at the shoulders and a belly pan, as well as plastic inserts that give the tank a bulkier look.

Combined with a short, better-integrated muffler and a slightly more compact wheelbase (we’re talking a tenth of an inch) and the end result looks and feels more premium than its predecessor. While the 800 screamed “I’m affordable, buy me”, the 900 opts for a more subtle and seductive approach, despite being effectively cheaper.

While the aesthetic changes are the most obvious modifications introduced with the new generation, the riding ergonomics have also been seriously revised. The foot pegs are set higher on the frame while the handlebar was pushed forward by a full inch. That may not seem like much, but it’s enough to create a sportier riding geometry.

The bike is compact enough that the reach isn’t exaggerated and you get to keep a certain flexibility in the elbows. My 5'8" stature fits the bike perfectly, without having to steeply lean in and contort my wrists. The legs, on the other hand (hah), are in a sportbike configuration, with the heels relatively close to the bottom and the knees at a tight angle, squeezing the fuel tank.

That being said, I clocked over 125 miles on the bike in a few hours—a healthy balance of highway, city, and winding road riding.  By the time I made it home, I was barely starting to feel the usual strain of sitting in the saddle too long. Granted, the standard seat is your run-of-the-mill pancake, but the shape—slightly narrower toward the front and wider at the back—fitted my physiology well enough. I have to say that I could see taller riders struggling a bit to get comfortable.

If the standard 32-inch saddle doesn't fit your stature, however, BMW offers a variety of optional saddles and suspension kits to help you find a better match. The list includes a lowering kit (30.3 inches), a low saddle (31.1 inches), a high seat (32.8 inches), a comfort seat (33 inches), and an extra height seat (34 inches).

I got my hands on the new BMW F 900 R mostly because I was curious about the new engine, not because I wanted to figure out whether it’s a good starter bike. However, a few hours in the saddle led me to the natural conclusion that this well-behaved, mid-size Bavarian was a fabulous starting point for new riders.

Sure, the bike produces 99 horsepower and 67 lb-ft of torque, which might look like a daunting amount of power for someone hitting the road on their own for the first time, but the delivery is so smooth and easy-to-manage that it’s anything but. 900ccs might sound like a lot of displacement and might get you a few raised eyebrows if you throw it in the same sentence as “novice” and “first bike”. However, if you feel courageous enough to get your start on it, you’ll have plenty of room to learn and grow.

The 895cc parallel-twin has a surprisingly broad and flexible powerband. While there’s no point at which the power curve spikes up, the 900 compensates by delivering a lot of usable power and torque in every quadrant. Combined with a well-spaced out six-speed transmission and you end up with a motorcycle that’s extremely easy to handle in all everyday life scenarios.

Even at very low revolutions, it takes a lot for the engine to show the usual signs of coughing and gurgling indicating that it’s about to choke. The throttle is smooth and gradual and doesn’t trick you into giving too much or too little in the span of a millimeter or two which contributes to the overall positive experience in the saddle. On the other end of the handlebar, the clutch squeezes easily and the pull-change gear-and-release routine is easy and organic. The transmission has no particular quirks that require a period of adaptation or a special handshake to figure out; everything is well-tuned and straightforward. The lovely twin purr that emanates from the muffler, especially at idle, is just a cherry on top.

The tester I got came with all the optional bells and whistles which allowed me to test the different Dynamic ride modes. While there are no noticeable differences in behavior between the standard Rain and Road modes, the Dynamic one subtly livens things up by making the throttle input more sensitive not to say twitchy—almost a little too much for the city and its irregular surfaces—and making the engine feel more responsive. Despite a livelier demeanor, the bike remains easy to handle. Think of the Dynamic mode as the equivalent of taking three sips of Red Bull.

At 465 pounds, the 900 is heavier than the outgoing 800 by almost thirty pounds but it remains lightweight feeling and easy to handle. I have to walk the bike forward and back into a tight 180-degree turn to get out of my parking and the R was an easy steed to maneuver out of the narrow space.

It also holds its own on the highway. No annoying front-wheel sway—despite its stripped-down silhouette, the 900 has efficient aerodynamics that cut through the wind. While most comfortable around the 5,500rpm mark, the engine doesn’t get buzzy even when you stretch it a little thin in the top-end of the RPM gauge—you feel the mill hard at work but it doesn’t translate into hand- and butt-numbing vibrations.

These are the good things—now the bad. I frankly don’t have a lot of bones to pick with the 900. Sure, the saddle is a bit tough (find a bike that’s not a proper tourer with a decent saddle nowadays). The one thing I will have to point out is that on two or three occasions, the cold starts were a bit arduous. I’ve had to restart the engine once or twice because it simply didn’t want to stay one. Once I got the bike running, revving, and warmed up, I had no issues whatsoever. It could absolutely be a quirk of the press unit I had but considering it was part of my experience, I had to throw it in here.

For the sake of being clear about what I thought of the BMW F 900 R, I repeated on several occasions that the bike is extremely well-mannered but I don’t mean that it’s boring. It expertly flirts with the limit between predictable and wild.

It offers a clean and polite riding experience that has the potential to verge on excitement in expert hands. That’s the reason why I immediately thought of a great—if only a bit ambitious—starter bike.

And if you’re a seasoned rider, the F 900 R is a good pick if you’re looking for a polished bike with a nice white-and-blue badge without the premium price tag that’s usually attached to it.

Other Awesome Rides To Check Out: