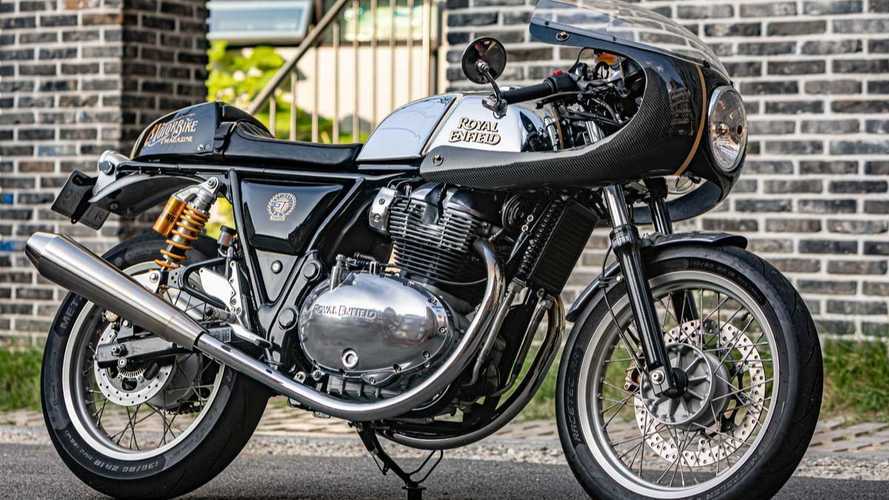 A refreshing take on Royal Enfield's most popular bike.

It goes without saying that Royal Enfield hit the nail on the head when they launched the 650 Twins a couple of years ago. Having seen lackluster success in their earlier models, the then-obscure motorcycle manufacturer from India quickly rose to stardom thanks to a recipe that, because of its simplicity, turned out to be well-loved the world over. The twins, consisting of the Interceptor 650 and the Continental GT 650 quickly became the favorites of enthusiasts the world over. From folks looking for retro-styled machines with incredible value for money, to those with a penchant for custom creations, the 650 Twins ticked all boxes.

This brings us to this awesome Continental GT 650 which was featured on Return of The Cafe Racers. Built by Jake Yang, editor of Korea-based Motorbike Magazine, this bike is a refreshing take on the British inspired retro-styled bike inspired by the Triumph Factory Custom Thruxton.. At first glance, the bike looks so well put together that you'd think it was a custom trim spec released by Royal Enfield themselves. Upon closer inspection however, you realize that this bike is made up of quite a lot of bespoke parts, and that the attention to detail is simply next level.

For starters, a custom bikini fairing from Crazy Garage adorns the front end. Made from fiber reinforced plastic, and finished off with a layer of carbon fiber, the piece screams classic cafe racer, yet exudes an aura of sporty performance. A ton of subtle yet totally trick pieces were added to the bike as well. A set of Zeta clip-ons with matching Halcyon bar-end mirrors give the bike a more forward-canted stance, essential for the classic cafe racer look. The cockpit is complimented by a set of Crazy Garage rear sets to give the bike a thoroughly committed ergonomic. The gauge cluster now sits atop a billet aluminum top yoke from Riga. Of course, the already retro looking engine received a couple of aesthetic mods as well. Wearing a new Riga billet sprocket cover, the engine was also repolished to give it a sublime mirror finish.

In order to evoke the TFC ethos, Jake set out to improve the Continental GT 650's performance, too. As such, a complete Öhlins upgrade was done to the bike. A pair of Öhlins shocks takes care of rear suspension duties, while lifting the rear slightly, giving it an even more aggressive stance. The forks were also beefed up with internals from the Swedish suspension experts. A Brembo 14RCS radial mounted brake master cylinder fitted, thus improving brake feel and response as opposed to the bike's stock axial unit. Lastly, to ensure that each and every one of the 47 horses gets used to their full potential, a set of sticky Meteler Racetec RR tires replace the stock Pirelli Phantom SportsComp rubber.