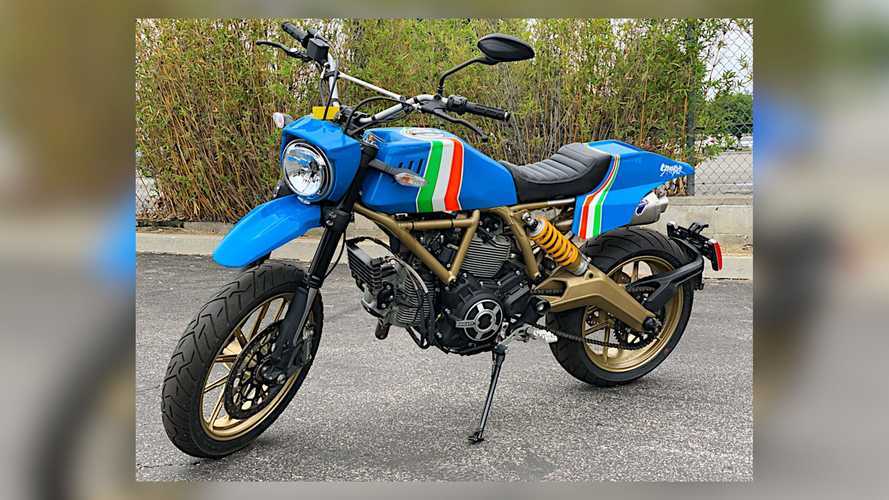 This is a thoroughly modern 2017 Ducati Scrambler, but its styling is so thoroughly and convincingly retro, it’s basically a primer for how to do this kind of look justice. Created by celebrity tattoo artist Grime—not to be confused with Canadian electronic musician Grimes—this bike made its official public debut at the 2017 Handbuilt Motorcycle Show. At the time, it was auctioned off with proceeds benefiting the Shriner’s Hospital for Children. A good custom for a good cause; what’s not to love?

Even three years later, there’s really not much that you can’t love about this bike. As always, customs are certainly subjective, so perhaps there’s someone somewhere who doesn’t love this thing. For those of us who do, you should know that to date, this thing has never been titled or registered, and comes only with its original manufacturer’s certificate of origin. It also has 6,731 miles on the clock, as well.

Upgrades weren’t only skin-deep on this build, which anyone who rides it will likely appreciate. Suspension upgrades include Andreani fork cartridges and an Öhlins rear shock with remote preload and compression adjustability. There’s also a sweet custom 2-1-2 Termignoni exhaust that’s tucked up neatly underneath that tail. Taillights, incidentally, come from a Ducati 996, and look chef’s-kiss-perfect in this application.

Plenty of custom fabricated bodywork and a custom saddle make this bike stand out in the best way possible, and the color scheme and graphics were inspired by the sweet spot between the Italian National Soccer Team and ‘80s motocross styling. Even the quasi-graffiti-styled lettering of the Scrambler name on the tail somehow looks fresh and cheeky, instead of hackneyed and leaky. How is that possible? I don’t know, it just is. Ask Grimes.

It’s currently up for auction again via Iconic Motorbike Auctions, and is currently located in Chatsworth, California. The auction ends on August 15, 2020, and if you’re looking for a truly special Ducati Scrambler, this might just be it.