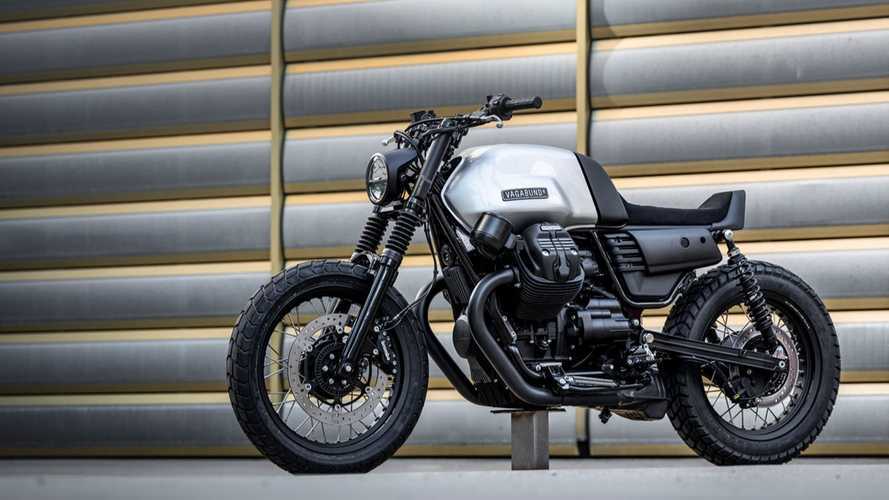 The craftsmanship is undoubtedly topnotch.

It goes without saying that it is every craftsman's vision to continue pushing the envelope in their craft. Be it music, performing arts, or the art building absolutely stunning custom motorcycles, I'd like to believe that no artist would want to become a one-hit-wonder. This is why, when the Paul Brauchart and Philipp Rabl of Vagabund Moto realized that their collection of custom motorcycles was beginning to look BMW Motorrad's custom division, they decided it was time to break tradition and begin work on a different platform.

Interestingly, of all motorcycles they could have chosen, they decided to give themselves a thoroughly hard time by choosing a Moto Guzzi V7 III. Those in the know would be aware that the Guzzi isn't exactly the easiest motorcycle to hack into and transform into a one of a kind custom creation. The bike is rather complicated both in structure and componentry, with sophisticated electrical systems, which leave a lot of wires and switches to be concealed neatly and seamlessly—something that Vagabund Moto's builds all have in common.

This indeed, took a lot of creativity from Paul and Philip, who employ very modern techniques in most of their builds. You see, the folks at Vagabund Moto use a lot of 3D modelling and 3D printing on their builds. Hence, their builds look nothing like backyard creations but rather, design concepts awaiting production. As a result, they were able to design thoroughly modern bodywork for the Guzzi, whilst maintaining a design ethos consistent with their other builds: minimalist and clean.

For starters, the bike's extremely slim and compact tail section was printed into existence using Nylon PA12 filament—a material that's both durable and structurally sound. All of the 3D printed parts on the Moto Guzzi were made from this polymer. Paul and Philip decided to retain the Guzzi's stock fuel tank, but do a little alterations of their own. A pop-up alloy filler cap has been fitted in favor of the stock unit. A slim and chic also Vagabund badge replaces the stock Guzzi eagle emblem, and a custom cowling was fabricated for the rear of the tank to make it flow seamlessly towards the bike's rear section. This gives the illusion that the tank ends much sooner than it actually does—a win, since they didn't have to sacrifice the tank's original capacity.

Some finishing touches to the bike include LSL footpegs, Bitubo shocks, and a bespoke Alcantara- wrapped saddle. Overall, this bike indeed does look like a concept awaiting production. It goes without saying that this Moto Guzzi V7 III Cafe Racer makes an outstanding addition to Vagabund Moto's repertoire of customs, and I can't wait to see what they have in store next.