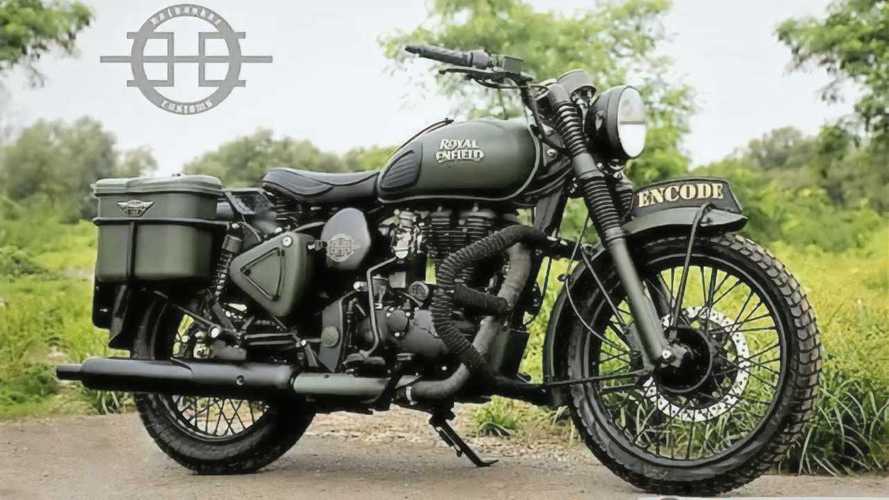 Royal Enfield is one of those brands that doesn’t only look vintage—it actually is. Aside from the addition of a few “modern luxuries” such as the electric starter and ABS, the Royal Enfield bikes haven’t evolved much over the past few decades, despite the brand's rocky path to success.

When a custom shop takes advantage of the bikes factory old school looks and plays up the brand’s history, we can’t help but marvel at how authentic the result looks. Mumbai-based Haldankar Customs created one of the coolest-looking, World War II-inspired custom Classic 350 we’ve seen yet. Meet the Encode.

Like most motorcycle makers, surviving the war meant reorienting their production to supply the Military with field-ready rides and then-British Enfield was no exception. While the WWII Royal Enfield WD/RE “Flying Flea” messenger bike the British Army parachuted to its troops during the conflict is probably the best-known RE produced in war time, this design seems to emulate the bigger WD/C.

Though the custom bike retains its vintage quality, the shop made several key modifications to give it its rugged, field-ready look.

This is how the standard Royal Enfield Classic 350 looks.

The front fork was stripped of its body-matching cover while the dual springs at the back look slightly taller than on the standard Classic which likely results in increased suspension travel. An aggressive crash bar was attached to the frame and the original 3.6-gallon fuel tank was replaced with a bigger, 4.7-gallon tank. The braced front fender is now decorated with an “Encode” plate while at the back, the designers added luggage and side case racks along with a set of military-looking hard cases. The shop opted for a matte Military green paint job with blacked-out accents.

Mechanically speaking, the bike remains unchanged and runs on the same 346cc, air-cooled single rated at 20 horsepower and 20.7 lb-ft of torque as the standard Classic 350.

This isn’t the first time a custom shop—or even the maker itself—gives us a modern Enfield with a historical twist but what can we say—we’re history buffs and that military look works for us.