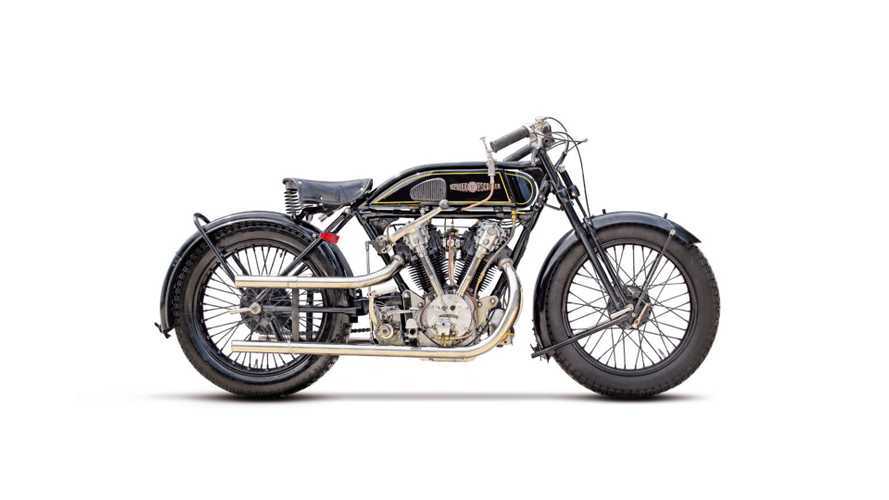 The king of bikes, the bike of kings.

We don't hear much about French motorcycles over here in The Colonies, but back in ye olden days—the first 30 or so years of the 20th century—la République was lousy with tiny, boutique bikemakers. Much like the rest of the world at the time, in fact. Marques like Abeille, Gnome-Rhone, Janoir, and Peugeot (to name a few), cranked out hundreds of fast, sharp-looking machines loaded down with Gallic style. Today, we're going to talk about one of my favorite French motorcycle manufacturers—Koehler-Escoffier.

Before we get into this, let me make a quick caveat. As is typically the case with my Cycleweird stories, reliable and detailed information about K-E bikes is thin on the ground. I had to travel to the deepest, darkest, most pedantic corners of the motoring internet to unearth what little I could about these beauties. That means that, necessarily, I'll probably miss or screw up some info here and there since I'm relying on poorly-translated French wikis and the passionate hurfing and blurfing of esteemed graybeards. Mea culpa. Oh, and if you know anything about Koehler-Escoffiers, let me know in the comments. With that out of the way, let's get on with the story.

A 1936 Koehler-Escoffier powered by a 350cc Mandoline engine. Handsome, innit?

Koehler-Escoffier was founded in Lyon, France, in 1912 by Marcel Koehler (I've also seen him referred to as Rene Koehler) and Jules Escoffier. Koehler was an engineer by trade—trained at the prestigious Ecole Centrale de Lyon—and Escoffier was a mechanic and works racer formerly of the Magnat-Debon company. These ambitious young Frenchmen—Escoffier was still legally a minor when they founded the company and required a letter of emancipation from his family to sign official company documents—were concerned primarily with speed, as shown by the company's numerous racing wins in the early teens.

Along with winning a bunch of races, the company developed its famous (for various metrics of "famous" nowadays) 500cc, overhead-valve V-twin Mandoline engine during its first years. The Mandoline, so-called thanks to its vertical timing cover, was Escoffier's brainchild and was based heavily on designs from his former employers at Magnat-Debon. By 1913, young Escoffier was competing in, and winning, races with Mandoline-powered machines. Unfortunately, the company's victories were short lived. Escoffier died in 1914 (I couldn't find anything about his death, but I'm gonna guess he crashed a race bike) and Koehler got sent away to Russia to fight the Great War. The company folded and the IP languished for the next five years.

Koehler-Escoffier's headstock badge.
One of the many ads touting the company's racing prowess.

After spending a few years as an aviation mechanic and then a pilot, Escoffier returned to France where, in 1919, he sold what was left of Koehler-Escoffier to engineer and racing driver Raymond Guiguet. He later went on to found Facel, half of the legendary luxury automaker Facel-Véga. The new proprietor upgraded the old Mandoline mill with hemispherical combustion chambers, a fancy-schmancy three-speed Sturmey-Archer gearbox, and a handful of other small mods. Then he took it racing. By 1922, the evolved Mandoline was producing 25 horsepower and was good for around 80 miles-per-hour. Indeed, Guiget won the 1922 Marseilles Grand Prix aboard a Mandoline-powered bike. The trusty old Mandoline-derived engine had reached the end of its serviceable life, though, and by the mid-20s, Guiguet was hip deep in a new engine design.

In 1926, Guiguet unleashed an all-new, thoroughly-modern, overhead-cam, 1000cc V-twin on the French motorsports world. The big twin was seconded by a smaller, but no less competent, 500cc single that was, essentially, just the big mill's crankcase and front cylinder with the rear cylinder blanked off. Guiguet immediately started winning races with his high-tech V-twin, but it wouldn't last. Only six of the big twins were ever sold (no firm numbers on how many were built, though), and the factory moved less than a hundred of the smaller 500cc bikes. Although he was a fantastic engineer and a great racer, Guiguet was a terrible businessman, and Koehler-Escoffier was, once again, on the brink of bankruptcy. Luckily for Guiguet, help came from the most unlikely place—the ruling body of the French National Championship.

The FNC bigwigs ruled that only bikes built completely of French components could compete in its races. For years, rival bike maker Monet-Goyon had been eating everyone's lunch at the Championship with bikes powered by engines from Swiss company Motosacoche. The FNC's rule that bikes must be all-French threw M-G's works team into a panic, until Guiguet approached the company and offered it Koehler-Escoffier. Monet-Goyon bought Koehler-Escoffier lock, stock, and barrel in 1929 and immediately stuffed K-E's race-proven engines in its proprietary frames.

This solved the problem caused by FNC's rule change and allowed M-G to continue beating all comers at the Championship. Guiguet himself was kept on as lead developer of M-G's race works program, and by 1930 had developed France's most advanced motorcycle racing engine—the Koehler-Escoffier 500GP V-twin.

K-E soldiered on for the next few decades. I couldn't find any information about what M-G or K-E got up to during WWII, but after the war, the company churned out various commuter bikes powered by small-displacement Villiers two-strokes. Monet-Goyon folded in 1957 and took Koehler-Escoffier along with it, marking the end of one of France's great motorcycle marques.