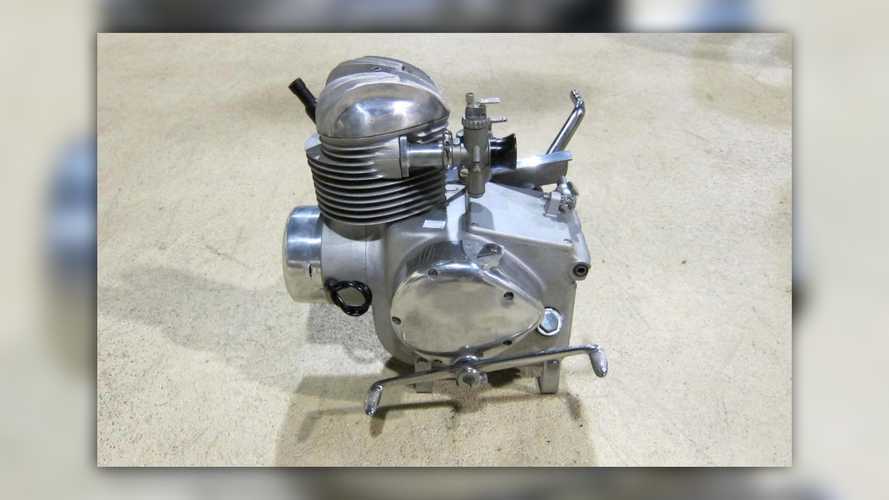 What's in the box?

I love a good mystery, especially a motorcycle-related one. From the legendary Traub to dusty barn finds, to one-year, one-off, long-forgotten UJMs, if it has a shady past or is of unknown provenance, I'm here for it. My latest obsession is this unidentified engine offered by Bonhams at its Bicester Heritage auction in August, 2020.

Just look at it! It's nice, right? Thing is, no one seems to know what it is. It certainly has the experts over at Bonhams stumped because the auction description simply reads, "Engine number 01820, with dellorto (sic) carburetor attached, completeness unknown, close inspection is advised." That last part is a masterpiece of British understatement. Close inspection advised indeed.

If Bonhams' people don't know what this is, can any among us identify it? I say we can. Of course, when I say "we", I mean all the graybeards and pedantic motorbike history nerds out there reading this. Anyway, let's take a look at what we're dealing with here.

At a glance, engine 01820 seems to be a small-displacement, overhead-valve, single-cylinder four-stroke. It's a unit constructed mill complete with an integrated gearbox with an unknown number of cogs. As the listing states, it has that Dell'Orto (is it Dell'Orto or Dellorto?) carb attached, but that doesn't necessarily point to a specific country of origin. Just about every Euro marque used Dell'Orto carbs at some point during the middle decades of the 20th century.

Looking closer, we see that it has a right-hand drive (curious), a left-hand heel-toe shifter complete with mechanical gear indicator (curiouser), and a wire coming out of the left-hand engine case just aft of that polished aluminum can bolted on the front (even curiouser).  There's a right-hand-mounted kickstarter, which you'd expect, but there's also a... something? A lever sticking out of the primary cover above the kickstarter whose use I can only guess at. The screws holding those polished side covers to the crankcase are flatheads, which speaks to a certain antiquity (or cheapness).

That shifter points to it being from mainland Europe since a Britbike of this vintage—and I'm guessing it's from somewhere between 1930 and 1960—would have had the shifter on the right side. The thing that really gets me is that coiled wire. Is the stator/magneto/whatever mounted at the front of the engine? If so, how's that work? If it's not the stator, is that where the points are? Again, if so, how do they work? There's no way, right? What, in fact, is that wire doing there?

I'm pretty stumped here. I bet you it's Italian, but I don't have any proof. Is this a crate motor made to fit into some company's frame like a JAP mill? Is it OEM or a long-forgotten prototype? When was it made? Why was it made? Whatever it is, it's pretty neat. I reckon we won't learn anything about it until someone snatches it up at the auction and does a super deep dive on it. What do you all think? Got any ideas what this is?