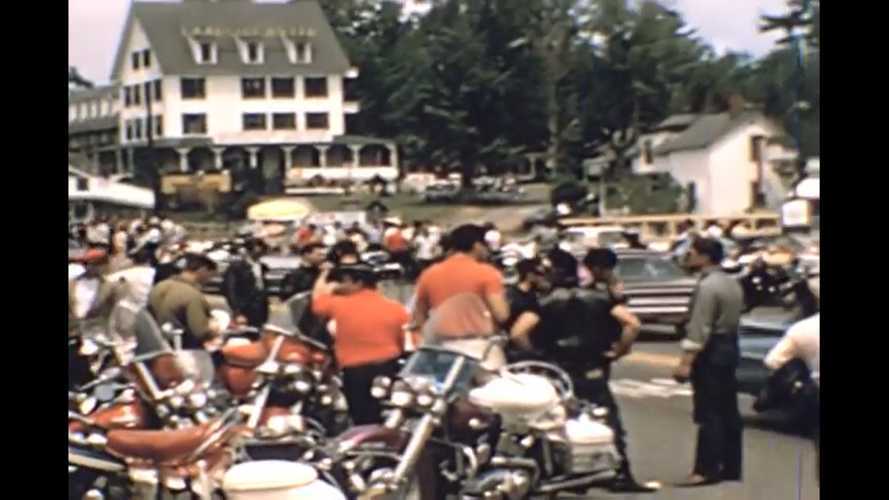 Laconia Bike Week normally takes place in June, though this year it's been postponed until late August because coronavirus ruins everything. It's going to be quite different for 2020, with the traditional beer tents and other vendors along Weirs Beach not appearing. It will still be far more similar to its current format than it was in 1965, however.

This home movie by Charlie Burrows, posted by his son Chris on Facebook and shared with permission, shows us what some consider to be the glory days of Laconia. Embedding is disabled for this video, so here are a few screenshots to entice you to watch the whole five-minute movie.

Weirs Beach is a popular tourist destination on New Hampshire's Lake Winnipesaukee. It's also the hub of Laconia Bike Week activities. This was no different in 1965. Then, as now, Lakeside Avenue was swarmed by motorcycles. There were no organized vendors, however. This wasn't a commercial enterprise back then, just a whole lot of bikers getting together and showing off their rides, and partying.

Then, as now, people came from all over for bike week. As Chris Burrows writes about his dad, Charlie, "The 20 guys, they all would ride up together to raise hell and have fun!" He's not kidding about raising hell, either. This was the year there was a riot at Weirs Beach, including a car getting overturned and set on fire. The National Guard was called in to help local police round up and arrest the rioters. Though there is a great deal of controversy about the use of federal agents in Portland, Oregon these days, there was none at all about the National Guard wielding live ammunition and bayonets, as well as the literal beatings that took place. Chris Burrows has pictures and news articles from the time on his Facebook page.

While tail fins are as dead as the dinosaur today, there were still plenty of them around in 1965, as their heyday of the 1950s was still quite recent. This bike shows a strong influence from the 1957 Chevy Bel Air, with similar tail fins that serve no useful purpose, but definitely look cool.

Racing has always been a part of Laconia Bike Week. In 1965, these races took place at the brand new Bryar Motorsports Park in nearby Loudon. The road course had just opened, with the accompanying oval track not completed until 1968. Bryar closed in 1989, then reopened in 1990 as New Hampshire International Speedway, now known as New Hampshire Motor Speedway.

This shot shows bikes accelerating out of "The Bowl," a tight, extremely banked turn that you can carry more speed around than you think you can. This section of track is still part of today's road course, though it runs in the opposite direction. Motorcycle racing is still alive and well at this track in its current form.

One thing that hasn't changed, though, is the beauty of New Hampshire's Lakes Region. My family has visited this area my whole life. Lake Winnipesaukee looks much the same today as it did then. Laconia Bike Week may have transformed from a booze-fueled biker riot into a family-friendly affair, but like Sturgis, the area is well worth visiting and riding anytime, Bike Week or otherwise.