Is Honda Finally Unleashing An Electric Super Cub On An Eager World? 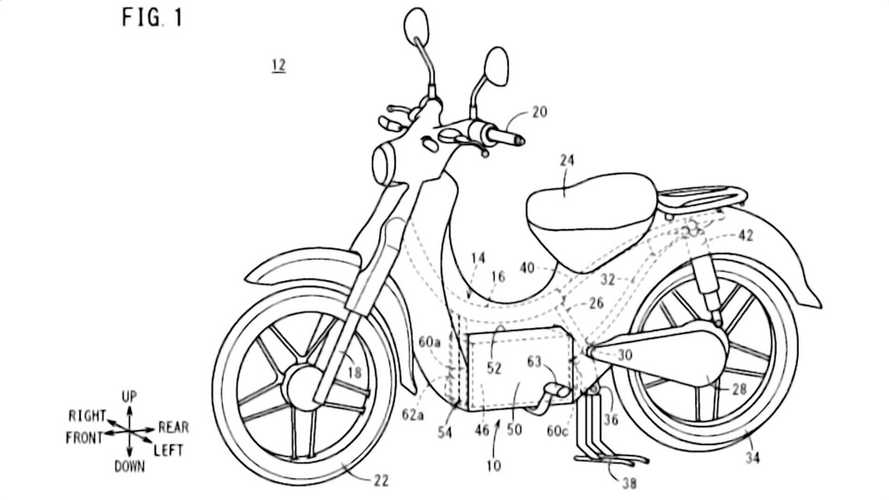 It introduced a concept in 2015, but it took until 2020 for us to see proof from a patent office.

It’s taken a little longer than expected, but it looks like that awesome electric Super Cub concept that Honda introduced back in 2015 is about to become a reality! How do we know? This U.S. Patent and Trademark Office patent application is a strong indicator. Although it was filed back in 2016, it was only officially published on July 23, 2020.

The design this patent illustrates in several drawings isn’t for the bike itself. Rather, it’s for the battery case structure that would help to power this Super Silent Cub. As you can see, it’s mounted at the lowest point in the bike’s frame, which is pretty standard placement for most electric bikes. Where it differs is in its handy tilting mechanism.

The battery is removable for easy charging off the bike. Instead of simply sliding into place within the Super Cub frame and being hidden by a little door panel in the bodywork, there’s a battery cradle involved. Open up the case and you can tilt the entire unit forward, making the battery much more accessible for all your needs. Gravity helps you slide the battery neatly into place, and little supports on the back side of the battery help position it so it’s back where it needs to be in order to provide power to your bike.

It’s super simple and intuitive, and while it might not seem like the most innovative solution in the world, it’s still heartening to see. Although patents aren’t necessarily indicators that any particular bike is actually destined to go into production, they do at least keep hope alive that it’s in the pipeline.

Since Honda somehow missed the boat on naming its electric Benly the very obvious “Benl-E,” may we humbly suggest a few alternate names for this electric Super Cub?

Here are just a few ideas:

No matter what Honda calls it, an electric Super Cub would be a most welcome addition to the family. There’s a reason that Shanghai Customs made a kit to turn regular cubs into eCubs in 2018, rather than simply making a single eCub as a one-off. If the finished product is a practical item at a reasonable price, there’s no way people won’t be throwing money at Honda’s feet to buy one.

Root, Root, Root For The Cub-E:

The Honda CT125 Hunter Cub Confirmed For Australia, Hope For The U.S.?
⠀