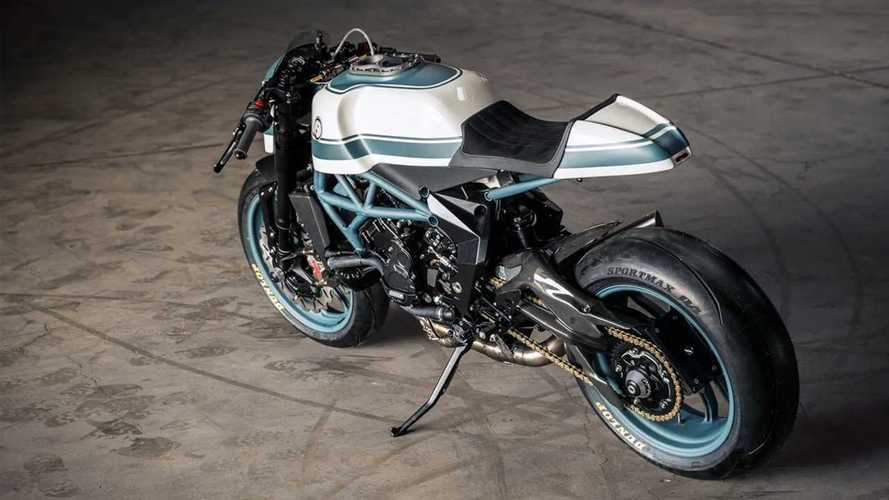 If there is one motorcycle manufacturer that somehow manages to create neck breaking motorcycles that exude premium design qualities and deliver chart topping performance, it's definitely MV Agusta. I like to describe MV Agusta's naked bikes as futuristically retro—in a sense that they incorporate extreme angular designs to retro design cues. As such, the design of their bikes can be polarizing. That being said, I personally fall into the group of people who drool at the sight of one.

Hence, I would think that an MV Agusta Dragster 800 RR would be an unlikely candidate to go under the knife and receive a makeover. That's why when I stumbled upon this build on Return Of The Cafe Racers, I was immediately drawn into all the amazing details, that, when put together, make the bike worth so much more than the sum of its parts. When I found out who the builder was, it all made sense. Roland Sands Design has created undoubtedly some of the most gorgeous and absolutely stunning custom builds the world has ever seen.

Worth A Second Glance:

This Custom Laverda 750 Will Knock Your Socks Completely Off

For starters, this MV Agusta Dragster RR received major revisions on the ergonomics. The stock handlebar was replaced with a set of low slung, aggressive clip-ons. A set of bespoke rearsets were crafted to complement the clip-ons upfront. To give the bike a total sportbike stance, a custom subframe was fabricated from chromoly tubing. This set the bike's seat a tad higher, as well as serving as a mounting point for the custom cafe racer style tail assembly.

Now, for the cream of the crop: the bodywork. The stock fuel tank was fitted itoa quick fill endurance racing fuel filler, while the custom tail section follows the aggressively shaped lines of the tank, and seamlessly integrates a very subtle LED light strip. An LED headlight sits in a bespoke bikini fairing. Carbon fiber radiator shrouds were also created to give the bike a touch of modernity that screams performance. Overall, Roland Sands explained that the design of the bodywork drew heavy inspiration from MV Agusta's Grand Prix victories from the 50s to 70s.

Adding a little bit more boost to an already ridiculously powerful motorcycle is something motorcycle enthusiasts the world over frequently do. This is no different with RSD's custom Dragster 800 RR. A fully bespoke Zard exhaust system was built for this bike, giving it a decent bump in power from its claimed 140 horsepower, and more importantly, an earth-shattering exhaust note for that 798cc triple.