Bimota Tesi H2: Everything We Know 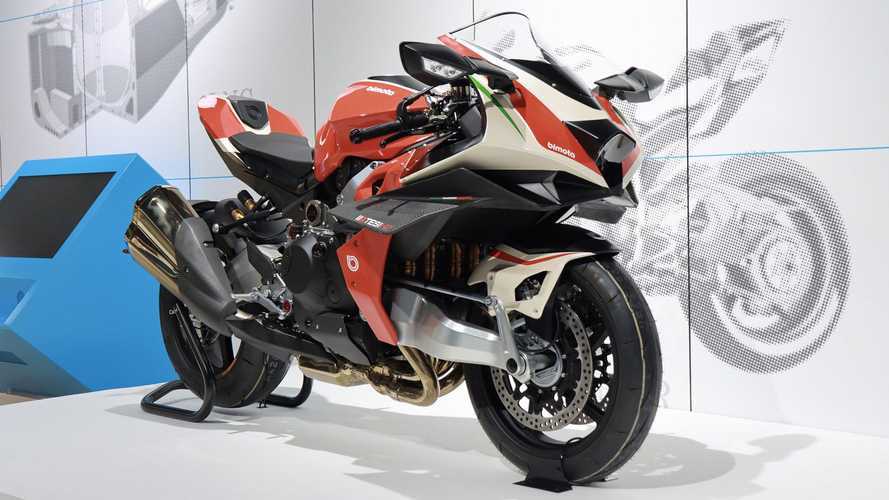 Party at the front and at the back.

n a string of revived legacy brands, Bimota is one of the latest names brought back to life. Instead of living under the umbrella of an Indian automotive group like Royal Enfield or Jawa, however, Bimota was saved by Kawasaki when it purchased 49 percent of the Italian firm’s stakes in October 2019.

Only a month or so after the pair up, Bimota showed up at EICMA 2019 with the first design issued from its partnership with Team Green: the polarizing and striking Tesi H2. While the design is all Bimota—including the dual swingarm—the engine is borrowed from the Kawasaki supercharged range, as the “H2” suggests.

The model was initially set to hit the production line in June, 2020, but, due to a certain pandemic, production was pushed back to September 2020. While we wait for the model to make its official debut and for Bimota to unveil all the numbers and power figures, let’s have a look at everything we know about the Tesi H2.

Design-wise, Bimota seems to have taken a page out of Kawasaki’s design book with all the sharp angles and creases that give the Tesi an alien-like appearance, a look reminiscent of the Ninja and Z H2. Perhaps even quirkier than its design is the motorcycle’s dual swingarm setup. Talk about a party both at the front and at the back. This isn’t the first time Bimota designs a hub center steering motorcycle—or that the name Tesi is used, for that matter. The three versions of the OG Tesi Bimota introduced in 1991 (1D), 1994 (2D), and 2007 (3D) all rocked the dual swingarm so it's only natural for the Italian firm to rekindle the flame.

Under the origami-looking fairing, the Tesi receives the latest H2 powertrain from Kawasaki, the same one used in the all-new Z H2. The 998cc, inline-four is armed with a supercharger for an output rated at 200 horsepower and 101 lb-ft of torque—at least for the Z, Bimota has yet to confirm the Tesi’s performance numbers. The engine is connected to 4-1-2 exhaust pipes.

Behind the windscreen, it looks like the Tesi borrows its H2 cousins’ instrument cluster with a circular analog rpm gauge complete with a rectangular digital screen likely to display speed, settings, and other useful information. There is no say what kind of equipment and electronics the bike will receive—that goes on the list of “to be announced” alongside the official power figures and the brake and suspension specifics.

The pictures do show a pair of Öhlins adjustment knobs on the bike’s right-hand side, suggesting the suspension hardware—at least at the back—will be provided by the Swedish maker. As for brakes, though the wheels are pretty crowded what with the swingarms and wheel guards, we can see at the back that the rear wheel is armed with a Brembo caliper and that the difference in size between the gigantic dual discs at the front the teeny tiny single disc at the back is almost comical.

What about the price? We’ll let you take a wild guess. Yep, that’s on the “to be announced” list as well. With the bike heading for production, we can expect Bimota to fill in the gaps soon enough.

Learn More About The Tesi H2: