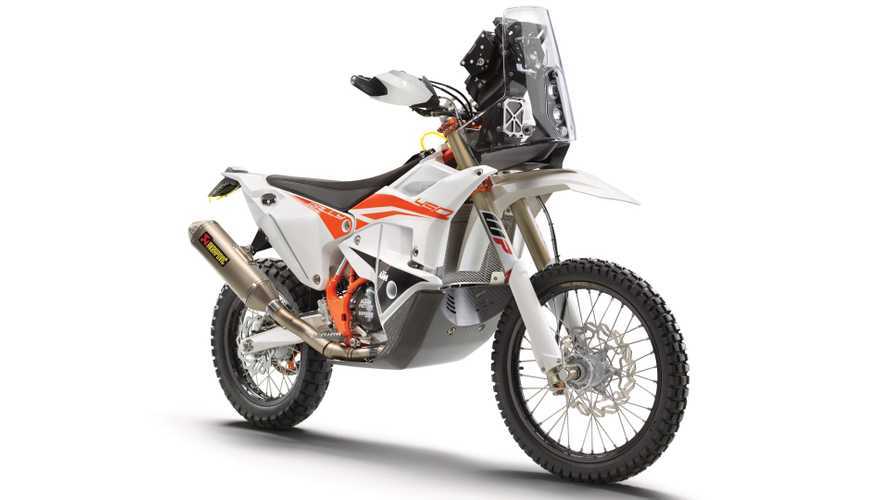 The Dakar-dominating weapon gets new gearbox for next year.

If you’ve got a need, a need for off-road speed, the new KTM 450 Rally Replica is ready to oblige. You’d better act fast, though. KTM says it’s only making 85 of these machines.

For 2021, KTM says the Rally Replica is getting a brand-new gearbox, along with changes to the shift mechanism. According to the press release, “The direct influence of PANKL Racing Systems materials inside the KTM Motorsport department meant technicians were able to further hike the bike’s excellent reliability, but also benefit the rider with a larger gear spread.” Sounds like the 450 is getting a wide-ratio gearset, then? Supposedly, it’s the exact same ratios the factory race team uses.

KTM Introduces The Dakar 2019 Team And The Bikes

The presser was pretty low on details otherwise. It did mention the bike's “WP XACT PRO closed cartridge suspension with sophisticated Cone Valve technology and purposeful aerodynamics and ergonomics crafted for peerless handling across a wide breadth of terrain,” but hey, that’s hardly a secret. These bikes will probably all go to racers who know exactly what they’re buying. KTM isn’t too worried about convincing the general public to purchase Rally Replicas, with a production run of less than 100.

The KTM 450 Rally Replica is special because it’s basically the same machine that KTM’s factory Dakar racers are running (and Husqvarna and GasGas factory riders’ bikes are pretty much identical, too). No doubt Matthias Walkner, Toby Price, and Sam Sutherland are all running bikes with a little higher tuning and with suspension, brakes, and ergos all set precisely where they want them, but for the most part, this is what the winningest Dakar team is using. Considering the KTM factory squad took the overall victory (and a lot of podiums and stage wins) from 2001 through 2019, you know this machine is dialed in to win. All the top privateers are running the Rally Replica, for that reason.

When Dakar mandated a switch over to 450cc bikes for the 2011 rally, KTM stuffed a 450 into its existing 690 chassis, and called it good. KTM totally overhauled the machine for 2014, and has been handily winning ever since, often pushing the liquid-cooled single-cylinder SOHC engine through the whole two-week desert race without even needing a rebuild. This is a very reliable, fast desert bike, although it would probably be a handful on tight singletrack.

The price? KTM says the machine will coast 25,900 Euros, which is surprisingly low for a factory race bike. Also, if you want to buy one and race at Dakar, KTM reminds us “A service and support package is available for a limited number of riders at the Dakar Rally at an additional cost for all KTM Rally models.” In past years that’s meant you pay up front for access to KTM’s parts truck—the parts you buy will cost you on top of that.