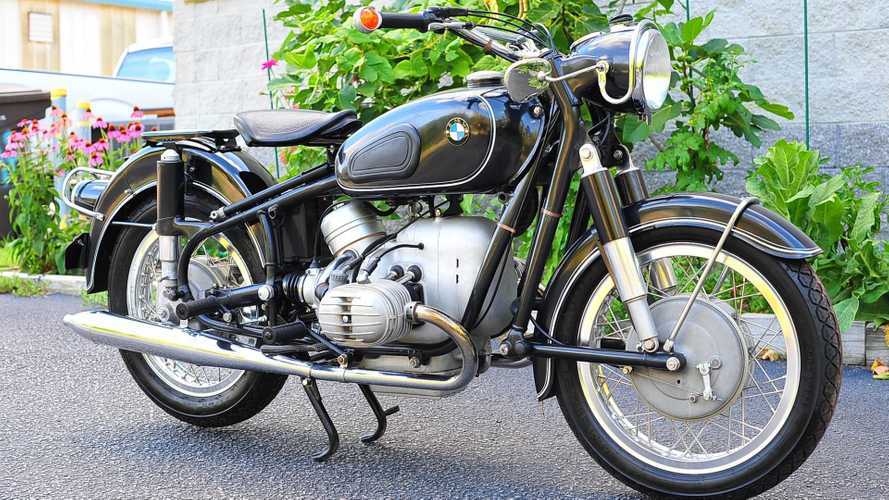 This well-kept Beemer is bringing in a lot of money at auction.

BMW is known for building powerful, luxurious motorcycles like the R1250 GS, the K1600 GTL, or the upcoming R18. Why are those machines so successful? It’s because BMW has a century of experience building proper motorcycles for grown-ups; machines like this 1965 R50/2 currently for sale at Bring a Trailer.

The R50/2 was powered by an air-cooled, 490cc, four-stroke flat twin with a four-speed gearbox and shaft drive. These days, a shaft drive is pretty standard for a touring bike, but in the mid-’60s, that wasn’t so common. Brit bikes, and the early Japanese machines, all had chains. By comparison, the Beemer was low-maintenance and ideal for no-stress touring.

This 1937 Moto Guzzi Sidecar Rig Is Headed To Auction Soon

Instead of a telescopic front fork, the R50/2 came with an Earles fork, like all BMWs of that period. This suspension setup moves the front end’s pivot point behind the front wheel in an attempt to minimize the influence of braking on suspension. In back, BMW used plunger-style shocks, a way of adding rear suspension without drastically re-working the mid-century frame design. The R50/2 came with drum brakes front and rear, like most machines of that period. Modern disc brakes would be better, but the drums got the job done.

Beauty is only skin-deep, but the R50/2 had that, too. BMW gave it carefully-detailed trim, swooping Art Deco lines, and lots of chrome. It had everything a well-off moto-enthusiast might want in the mid-’60s, a good-looking bike with reliable mechanics to back it up.

That was 50 years ago, though. Any bike that old won’t be reliable today unless it’s been cared for properly. This bike seems to have been well cared for, though. The seller says “overhauls of the engine, transmission, clutch, wheels, and other items were performed by Bob’s BMW in Jessup, Maryland in October 2009, while service carried out by the seller within the last 100 miles consisted of fluid changes, a valve adjustment, and torquing the head bolts.” There’s a new Denfield solo seat, new stainless steel wheel spokes, new luggage rack, and lots more. This bike is in good shape, and with only 9,000 miles on the odometer, it should have plenty of life left, if you want to ride it. Despite the machine’s near-showroom condition, it definitely seems like a waste to buy it just to put on display.