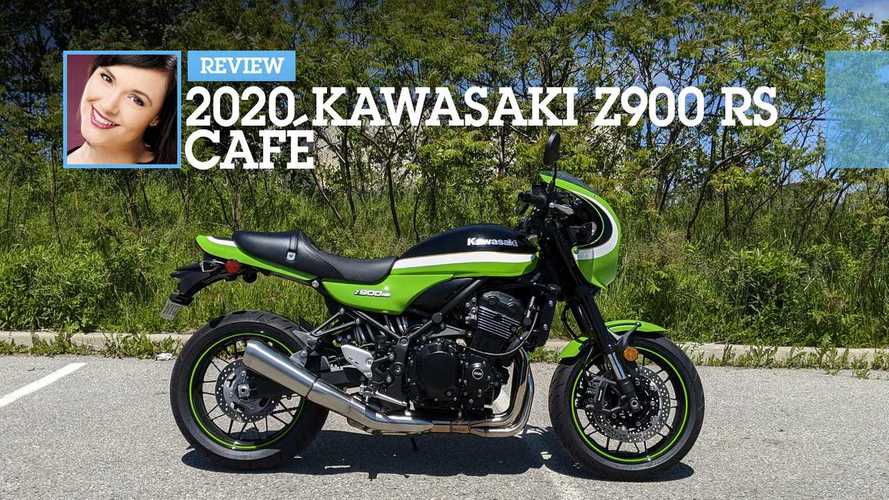 Kawasaki introduced its very first Z model 48 years ago. In an attempt to hold its own in the newly formed superbike segment and to one-up Honda’s massively popular CB750 Four, Team Green launched the Z1 in 1972. The prototype dubbed the “New York Steak” had been in the works for a few years already as a future 750cc model when Honda took everyone by surprise with the Four in 1969. Instead of rushing a still fragile Z1 to the market to compete with Honda’s new superbike, Kawasaki sent it back to the drawing board to increase the displacement, iron out the kinks, and hopefully come up with a bike that could outshine Soichiro’s team.

Three years later, the 903cc engine was born, armed with a dual overhead cam—a first for a Japanese big-bore bike. The Z1 was tremendously successful and was dubbed by the media as the “King of Motorcycles”. On a roll, Kawasaki released the Z900 three years later (KZ900 in the United States) then the Z1000 the following year, in 1977.

The Z nomenclature has since been an important part of Kawasaki’s lineup, finding various and sometimes creative applications along the way. The Z series as we know it today started with the 30-year-anniversary Z1000 introduced in 2003, a naked sportbike bike based on the ZX-9R.
There's a saying, however, that tells us never to forget where we come from. Kawasaki took it to heart when it introduced its duo of vintage-inspired Zs to the family in 2017: the Z900 RS and RS Café. The models were an homage to the original Z with their vintage aesthetic built on the Z900’s modern underpinnings. What’s not to like about that? Isn’t this pretty much the best of both worlds?

For 2020, the Z900 RS Café remains unchanged but I decided to review it anyway because it features on my "treat" list—a list of bikes I review for the simple pleasure of getting my hands on them. So, while there’s nothing new on the RS table this year, let me sing the praises of a truly awesome bike.

Did I mention the bike is handsome? Whew, guys, this is one hot-looking modern retro—if you’re into the whole café racer aesthetic, like yours truly. There are actually two café racer-style bikes in Kawasaki’s lineup: the W800 Café and the Z900 RS Café. One is more forgettable than the other if you ask me.

When it was first introduced, RS Café's design and livery—everything from the cowl to the color scheme to the ducktail rear fender—were inspired by the 1982-1983 Kawasaki KZ1000R. The 2020 livery is an elegant evolution with a two-tone green and black tank with a subtle golden pinstripe. The old-school look is completed with a modernized tuck-and-roll saddle and, instead of the 82’s boxy gas tank, the modern RS rocks a tear-drop tank instead, borrowed from the earlier Zs.

Kawasaki's neo-retro design is so efficient that, to the untrained eye, the RS Café looks like it time traveled directly from the 80s. I was asked several times by strangers on the street what “year it is” and got a few raised eyebrows when I answered that it’s a 2020 model.

The four overlapping exhaust pipes running down the front of the engine don’t have quite the same presence as, say, Honda’s cascading pipes, but do nicely frame the engine. They converge under the belly and end on a brushed muffler. The accent on the RS Café are almost all blacked out safe for the brake and levers hardware, which creates an elegant, streamlined silhouette.

The RS is a fairly tall bike for the segment, with a seat height of 32.9 inches for the standard and 32.3 inches for the Café. When you look at the bike and sit on it, it feels as though the saddle is almost as high as the handlebar, which does two things.

First, it leaves a decent amount of space for the legs. With the foot pegs set low on the frame, just above the exhaust, the waist is large enough so that you’re not stuck in an awkward crouching tiger position. Second, it creates an interestingly dynamic riding position. It forces you to lean in slightly (at least at my arms’ length, I did have a bit of reaching out to do) but because the saddle is so tall in comparison to the handlebar, you’re not hugging the fuel tank like on modern sportbikes. It’s an interesting stance that I had never experienced before and one, I must say, I really enjoyed.

See, my concern with clip-ons and sport stances is that my hands easily get numb when my wrists are contorted at weird angles or that there’s a lot of weight put forward. On the RS Café, however, the riding position didn't take the usual toll on my hands. I would even go as far as to say that my 5’8” stature was perfectly comfortable riding it around to show it off.

My legs didn’t feel crammed and the arms’ reach was comfortable. The saddle, slightly ticker than on the standard RS, was cushy and comfortable—a rare feature on modern bikes who usually expect us to get cozy sitting on a pancake. The Café might have sporty aspirations but compromises very little on comfort. Chances are that day-long rides won’t be a decision you’ll regret one hour into the trip.

Kawasaki’s inline-four engines are, at least in my opinion, some of the smoothest-running fours on the market. The Z900 RS’ 948cc mill is no exception, and with an output rated at 111 horsepower and 72 lb-ft of torque at 6,500rpm, it goes from zero to yee-haw in no time.

What a genuinely fun engine to get acquainted with! I’m aware that the Café’s underpinnings are borrowed from the Z900 with a few tweaks to improve rideability, so this is a bit of a broad statement that isn’t specific to the model. However, what the Café has that the standard Z doesn’t is an opera voice.

While I’m not an advocate of loud pipes save lives, the gorgeous note emanating from the specially-tuned exhaust adds to the experience and makes the RS that much more pleasurable. Instead of the Z’s typical high-pitched whine, you get a rich roar that makes you want to rev the engine for all eternity. Think infinite gears and acceleration à la "Fast and Furious".

The engine provides plenty of grunt particularly in the lower range and it delivers a nice, consistent pull. I felt very much in control of the bike as though we were working together rather than against one another. It’s not a moody bike—it’s mild-tempered but with plenty of kick to keep things interesting. I wouldn’t want to own a motorcycle that’s trying to buck me off the saddle as soon as I twist the throttle.

The one small downside I found on the loaner I tested was how long the clutch pull is. The friction point is only millimeters away from the lever being fully released which resulted in a few, shall we say, rocky gear changes from first to second. The good news is that it can be adjusted—which is a step I recommend you take if you plan to get your hands on one.

The steering is precise and the bike is sure-footed and well-grounded. The dynamic stance gave me loads (too much?) confidence and while I’m definitely not a technical rider, I had no issues taking curves at what felt like ambitious speeds. The bike leaned in, headed where I wanted it to go, and gracefully rocked in the bends. I felt more aggressive and talented than I truly am, without pushing my limits beyond what I was comfortable with.

While the Café is pretty easy to handle in the city, it really shines once you leave the urban hustle and bustle behind and make for the hills. Even a ride on a boring highway becomes interesting in the saddle—it handles highway speeds well and makes you forget to look down at the speedometer every so often.

The Kawasaki Z900RS Café definitely rides like a bike designed to be ridden. It’s fun, surprisingly well-mannered unless you tell it otherwise and just an overall delight. At $11,799, there’s a $600 premium over the standard RS but in my opinion, it’s a $600 well spent.

If you dream of owning one, I only hope for you that you’re a people’s person because trust me, that bike is a conversation starter.