This Turbo 1979 Honda CB750 Is Not Your Average Cafe Racer 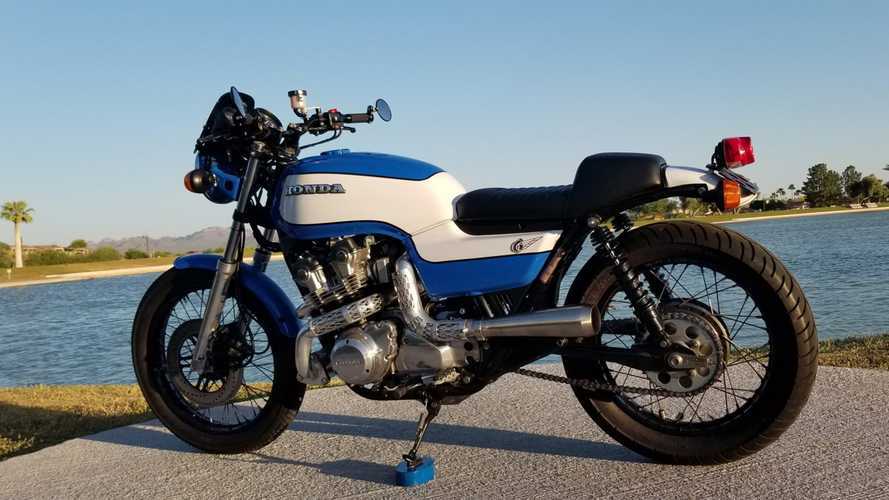 A top-shelf resto-mod, with a blower.

By now, the old Honda CB750 café racer formula is getting pretty tired, right? Wrong. Here’s a build from California that’s got the classic bum-stop seat, bar-end mirrors, minimalist flyscreen … and the owner added a turbocharger. It’s for sale on Bring a Trailer, and at this point, bidding is fairly reasonable.

This build started with a fairly boring 1979 Honda CB750K, in that classic late-70s Honda brown paint. The ‘79 model was the first year for the DOHC engine, which is supposedly harder to modify than the earlier SOHC engine. That didn’t stop California-based Turbo City boring out the Honda’s air-cooled mill and bolting up a turbocharger and custom exhaust system, though.

Usually, when you see these sorts modifications, turbo geeks start spewing out questions about the finer details of the build. Were the engine’s internals upgraded, to handle the extra power? How much boost does the turbo provide? The seller adds a few details in the advert’s comments (“boosts 5/7lbs max, is super efficient and has no slingshot effect like a big turbo in a Supra would”), but there’s also a write-up for the build on the Vintage and Classic Hondas forum.

The photos in that write-up show the painstaking work of fabricating the turbo system, but also show the work required to restore the rest of the bike. Originally customized in 2014 this CB750 was fairly crusty-looking at the start of the build. Now, thanks to hours and hours of work, it’s a sharp-looking retro custom.

Flipping through the ad’s pictures, there are a few discrepancies in the photos; the bike appears in slightly different configurations. As per the ad, “The bike was sold by Tom “the builder' with the wire wheels and does not come with the solid wheels or another set of wheels.” Hopefully that clears up any confusion.

The ad says the Honda has 5,000 miles on the odometer, but total mileage is unknown. When you buy a vintage turbocharged bike, you’re taking a gamble anyway. If you’re OK with that, head over to Bring a Trailer and start bidding. This CB750 is a lot more affordable than a new Kawasaki H2, and probably even more affordable than a vintage Honda CX650 Turbo—and it’s definitely a one-of-a-kind.