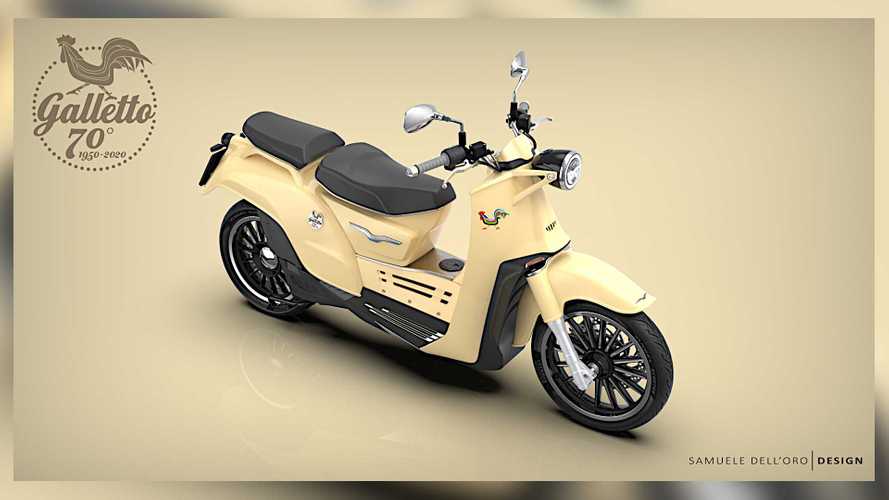 Cross a Piaggio Beverly and a Vespa Elettrica X and you get a magic rooster!

When most people think of scooters, they think of tiny wheels. If you’re only riding on reasonably well-maintained, paved roads, you might not give them much more thought than that. However, if you’re traversing rougher terrain, those tiny wheels can be a big impediment. With this circumstance in mind, Moto Guzzi released its first Galletto back in 1950. This beloved cross between a scooter and a motorcycle had 17-inch wheels, a practical seat height, and a spare wheel and tire mounted up front, tucked in neatly just behind the forks. It lasted until 1966, and sold over 77,000 units during its 16-year lifespan.

Sounds like the perfect recipe for a modern revamp, right? That’s what industrial designer Samuele Dell’Oro thought. What better time than the 70th anniversary of this iconic Guzzi? Unsurprisingly, Dell’Oro re-imagined a modern Galletto with an electric motor. Having grown up only a few kilometers from Mandello del Lario, he told Vai Elettrico, meant that he grew up fascinated by Moto Guzzi. As he developed his love of motorcycling, everything just came together to inform this concept design.

It’s a hybrid, not just an electric scoot, and Dell’Oro’s design very practically integrates the Vespa Elettrica X motor into the mix, although he also said the full electric Vespa motor could be used instead. A four-liter gas tank powers the generator that powers the motor, allowing it to have a smaller lithium-ion battery pack on board. Power output will be around 5.36 horsepower, with a range of 200 kilometers, or just over 124 miles. Battery pack is a 4kWh unit that charges in four hours at 220 volts. Chassis is based on the existing Piaggio Beverly, and would have a 16-inch front wheel and a 14-inch rear, as well as disc brakes all around and ABS.

Guys, I don’t think I’ve ever wanted a concept to become reality this much in my life. This is precisely how you update a classic and bring it into the modern era. Dell’Oro’s modern Galletto is absolutely beautiful, and a perfect homage to the original. From the colorful rooster logo to the luggage rack that can also hold an optional passenger seat—in case your cargo is a person and not a top box full of stuff—it’s all about the small details, like alloy wheels made to echo the original spoked versions. Nice work!

Sadly, for anyone hoping to see it come to showrooms soon, it’s only a concept at the moment. What do you think?