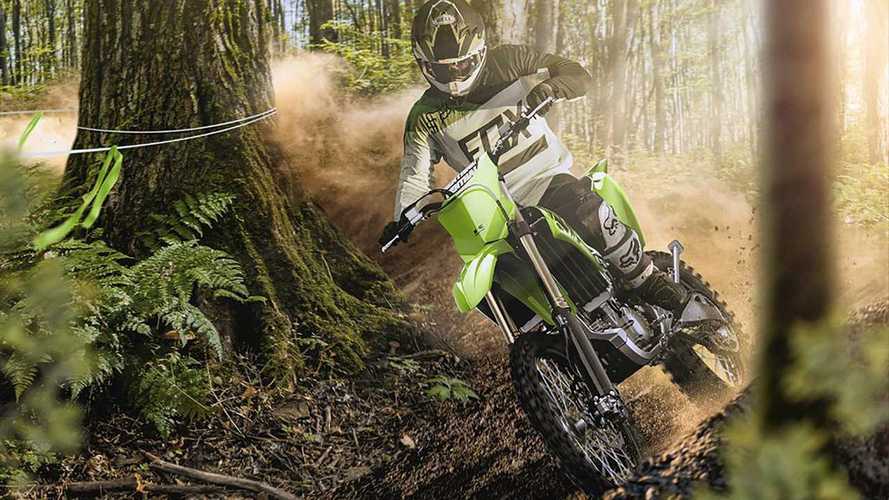 Kawasaki is finally summer-ready with a full lineup of off-road and motocross competition-ready motorcycles. A few weeks after confirming which models would carry over unchanged for 2021, Team Green proceeded to unveil the thoroughly upgraded KX250 alongside the all-new competition-ready variant, the 2021 KX250XC.

The 250 was pretty much sent back to the drawing board and returns with significant updates for 2021. We take a closer look at everything new on the KX250. Here’s everything we know about the 2021 model-year.

On the architecture front, the 250 gets a slim new aluminum frame based on 450 chassis that uses the engine as a stressed member. This results in an increased overall rigidity. To match the new frame, the swingarm was also replaced with a unit borrowed from the 450—for improved rigidity purposes as well.

The frame is mounted on a 48mm KYB inverted front fork with 25mm damping pistons and a KYB rear shock paired with dual-compression and high and low-speed damping adjustment. Suspension settings at the front and back have been “fine-tuned” to provide optimal support for the new frame. The 250 ultimately weighs in at a tiny 236.5 pounds ready to go.

From an aesthetic standpoint, the new model-year received a few noticeable tweaks including a flatter, smoother surfaces which, according to Kawasaki, allows the rider to move and shift more easily on the bike. The model also features Kawasaki's proprietary Ergo-Fit system which allows the handlebar and the foot pegs to be adjusted to the size of the rider. New for 2021 is a standard, factory-style aluminum 1-1/8” Renthal Fatbar handlebar.

The 249cc liquid-cooled thumper received a few upgrades of its own including finger-follower valve actuation, meant to increase the engine’s output and peak power while improving its mid-range performance.

Using the finger-follower valve actuation also allows the engineers to use what is described as a “more aggressive cam profile” as well as large-diameter intake and exhaust valves which result in a higher-revving engine. The KX250 also becomes the first quarter-liter motocross bike with an electric starter, an important move for Kawasaki that explains that a quick restart can make a difference in the rider’s performance on the dirt track. The engine is paired with a five-speed transmission and a segment-first coned disk-spring hydraulic clutch.

Thanks to three differently tuned direct fuel injection (DFI) couplers, the rider can select between three pre-programmed fuel injection and ignition mappings based on the conditions they’re dealing with.

The all-new Kawasaki KX250XC takes all the good stuff the KX250 has to offer and takes it to a higher, competition-oriented level. For a $100 premium. The XC adds trim-specific engine tuning, off-road friendly suspension setup, a 21 and 18-inch set of wheels wrapped in Dunlop GEOMAX AT81 tires, KX250 brakes with Nissin master cylinder and XC-specific pads, a skidplate, and a kickstand.  The XC adds four pounds to the standard KX—a small sacrifice to make to take advantage of all the motocross goodies.