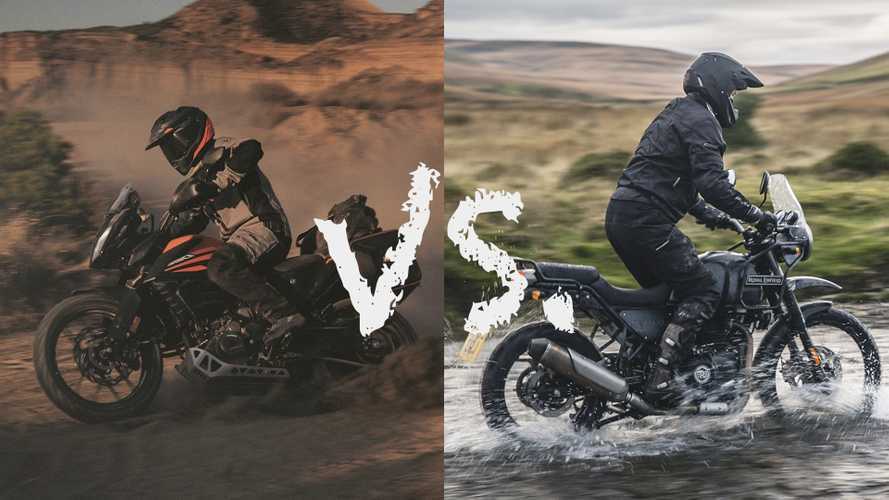 In November 2019, KTM unveiled the latest addition to its 390 lineup. After the RC and the Duke, the new 390 Adventure model completed KTM’s trio of small-displacement street bikes. Channeling its big brothers’ jack of all trades attitude, the new baby Adventurer launched with a slew of interesting and exciting features.

Only one equally small-displacement model was gnarly enough to measure up to the new KTM. The Royal Enfield Himalayan launched four years ago and rapidly became a staple of the segment thanks to its serious adventure chops and small price tag. How does the premium KTM compare to the minimalistic Royal Enfield? That’s what we’re about to find out!

So Similar, Yet So Different

Even though the two motorcycles compete in the same, small-displacement adventure bike segment, they have almost completely polar opposite personalities.

The Royal Enfield Himalayan is the quintessential, entry-level adventure bike. It’s basic, straightforward, and easy to get on. The 411cc block is air-cooled and produces a lazy 25 horsepower. In addition to its underwhelming performance numbers, the bike weighs in at a relatively hefty 428 pounds—we say relatively because that positions the 400cc in 600-700cc territory weight-wise.

The thing is that the sluggish performance and heavier weight actually work rather well for the Himalayan. This bike isn’t meant to get you anywhere fast—it’s meant to get you there, period. If you break down on the side of the road, chances are that if you’re mechanically inclined, whatever happened, you will likely be able to fix yourself. Plus, contrarily to most adventure motorcycles on the market with towering seat heights, the Enfield’s seat is set at an easier-to-get-on 31.5 inches.

On the other end of the spectrum, we have the KTM 390 Adventure, a bike that offers all the good stuff the Austrians have to offer in a small, compact package. Though 45 horsepower doesn’t sound like much, on a bike as small as the 390, it’s plenty of power to go about your daily life and then some.

Team Orange has a knack for tuning its motorcycles to make them zippier and more responsive no matter how big or small they are. Apply that “fun is better” ethos to a 380-pound bike and you end up with a little firecracker that’ll get you everywhere you need (or want) to go. That is pretty much the 390 Adventure’s premise—making the most of the Duke 390’s engine in a trail and travel-friendly format. The fact that the KTM has six gears versus only five on the Royal Enfield is also likely to make the Orange adventurer a little more flexible on the road

The KTM is also a little more elaborate and refined than the Himalayan with a liquid cooling system, cornering ABS, and an off-road riding mode. The Himalayan also features dual-channel ABS that can now be switched off (new for 2020) but if more minimalistic on the electronics front than the KTM is.

KTM’s adventure and off-road lineups need no introduction. The Austrian manufacturer has proven its off-roading chops times and times again—it won now fewer than 18 Dakar rallies in the motorcycle class!—so you can be assured that the "Adventure” badge isn’t just a decoration. When KTM says adventure, it really means it.

This makes the bike more comfortable on long hauls while the 7 inches of travel at both wheels means it can also take a fair bit of abuse without making the rider pay for it.
Since its introduction in 2016, the Royal Enfield Himalayan has gained a favorable reputation in the segment for being far more capable than it looks. Several YouTubers have even made the Himalayan their ride of choice for their worldly adventure, including the popular Dutch adventurer, Itchy Boots.

The bike uses a 41-mm fork with 7.87 inches of travel at the front and a monoshock at the back with 7 inches of travel—a little bouncier than the KTM. While the 390 uses a set of 19 and 17-inch cast wheels, the Enfield is armed with a pair of 21 and 17-inch classic wire-spoke wheels—a classic feature on more old-school off-roaders and scrambler and probably the better type of wheel for the mission.

Both bikes have a similar fuel capacity with the smaller KTM armed with a 3.8-gallon tank and the bigger Royal Enfield, with a 4-gallon tank. Neither manufacturers advertise their respective model’s fuel economy numbers so we turned to real-world numbers experienced by our colleagues to get an idea of how far they can go.

For the Himalayan, a review of the 2018 model-year by Motorcycle.com suggests the bike consumes on average 70 mpg. Considering the bike hasn't changed since, we can suppose the consumption number remains virtually unchanged which means a single tank on the Himalayan could last you for up to 280 miles.

In addition to their opposite personalities, price is another aspect in which the KTM and the Royal Enfield greatly differ.

Whether it’s in the U.S. or on its local market in India, Royal Enfield’s marketing strategy is simple: offer descent, basic little bikes priced aggressively—a selling point that was working very well for the brand, at least until recently in India, but that definitely continues to seduce abroad. After all, you can get your hands on a shiny new Himalayan for $4,749, which is cheaper than buying a used ADV in a lot of cases.

If you opt for a Team Orange product, there’s usually a bit of premium that comes with three-lettered badge and at $6,199, the 390 is true to its lineage. That being said, the difference in price can also be explained by the number of features and electronic assists available the 390 has to offer. As we previously discussed, the Himalayan is pretty bare on that front and is offered with the minimum requirements to be relevant in 2020. The KTM has a much longer list of features which also includes a 5-inch TFT display and MyRide app connectivity.

Note that both companies offer an entire collection of factory accessories to spruce your bike up including luggage, protectors, phone mounts, engine guard, sump plates, and more.

Both the KTM and the Enfield have a lot to bring to the table in terms of adventure capability. If you’re more likely to travel on the highway, chances are you’ll probably find the KTM 390 Adventure more versatile and flexible. Thanks to its generous menu of features for the price point, the KTM is an easy bike to live with on the daily without feeling like something's missing.

The Royal Enfield Himalayan on the other is perfectly rugged and capable but could feel a bit limited on the highway between its lower output and smaller gearbox. That being said, if you’re not in a hurry to get where you want to go and would much rather take the path less traveled, you can do so with confidence on the Himalayan.