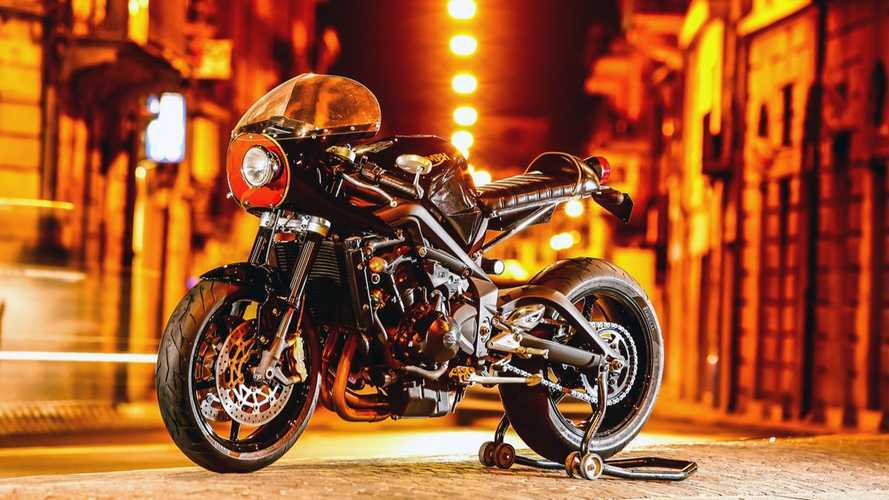 Mr Martini at it again with another absolute stunner

A high performance motorcycle from the past decade isn’t exactly what most custom builders would use as a base bike for a radical custom. Sure, we’ve seen custom bikes as new as the BMW F 900 R, but bikes like those are predominantly stock, merely featuring fancy paint jobs and some custom parts. Now, I’m not discounting the novelty of bikes like this. However, to transform an already stunning motorcycle like the Triumph Street Triple R into something truly one of a kind is simply a display of otherworldly talent.

Such is the case with Mr Martini. Having been in the custom motorcycle scene for decades, Mr Martini has a unique sense of style he always incorporates into his builds. His latest creation started life as a Triumph Street Triple R, and is dubbed the ‘Jerolamo SR.’ The latest in a series of custom bikes bearing the Jerolamo name, the SR incorporates a similar design language as the rest of the Jerolamo lineup. Specifically, the chrome steel rear frame with a custom leather Mr Martini saddle gorgeously perched atop, is one of the defining features of the Jerolamo line of custom bikes.

The aesthetic achieved by the slimmed down rear end gives the bike a more aggressive, athletic stance. Giving the image of lightness and agility. Apart from this, it definitely emphasizes the beefiness of the 675cc triple that powers the Triumph Street Triple R. In order to achieve this, Mr Martini custom fabricated the entire rear tubular subframe. Due to Triumph’s frame design, Mr Martini was able to create a rear subframe that would directly bolt-on to the bike’s frame, giving it a seamless finish. In order to clean up the rear end even more, the Street Triple R’s electronics were stashed away, and its battery replaced with a small lithium ion unit resting inside a custom fabricated box in between the frame rails.

Moving towards the front of the bike, the custom bikini fairing has become one of Mr Martini’s signature touches. Giving the bike a classic, English cafe racer look, the fairing was first found by Mr Martini at a market several years ago. The look appealed to him so much that he has since recreated the mould for this fairing, and has used it in some notable builds. As an homage to classic endurance race bikes, the headlights Mr Martini installed were mounted in an offset manner, and a set of low-slung clip-ons were mounted.

Mr Martini left the bike’s performance pretty much stock, save for a gorgeous Zard 3-to-1 exhaust system. Probably the most notable performance gain to the bike would have to be the fact that it shedded a whopping 22kgs in weight.