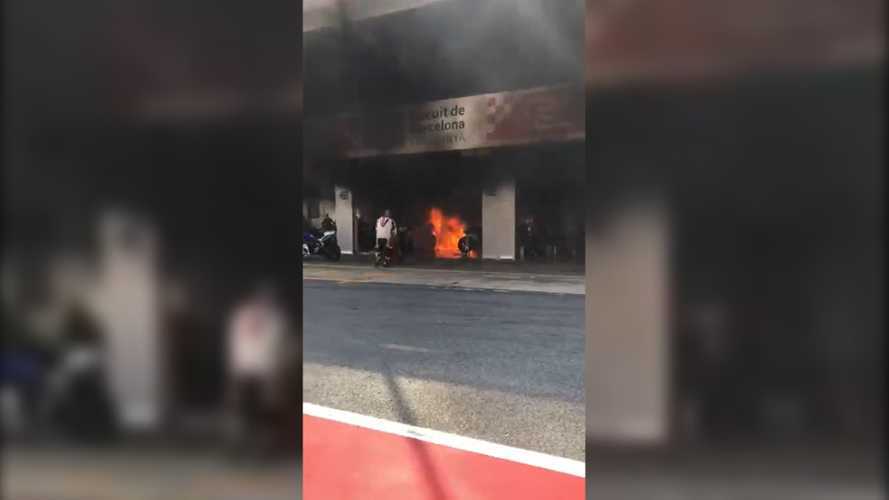 No one was hurt, but two motorcycles were destroyed.

Track days are finally happening again, not just here but all over the world. One particular event in Spain got a bit hotter than expected when two motorcycles caught fire in the Barcelona-Catalunya Circuit's garage area.

It seems that repairs were underway on a BMW S 1000 RR. The gas tank had been drained, then removed from the bike. Unfortunately, gas vapors remained in the tank. Vapors are even more flammable than gasoline itself, and something sparked to set them ablaze.

Only You Can Prevent Motorcycle Fires:

Watch This Motorcyclist Become A Firefighter

People immediately sprang into action to put out the fire. Twitter video shows several people, some still wearing racing leathers, rushing extinguishers to the garage bay and hosing down the fire. Fortunately, nobody was hurt and the blaze was quickly contained.

The garage area was also not significantly damaged from the fire. The BMW, however, as well as a Yamaha R1 parked next to it, appear to be badly burnt.

Little else is known about this incident, including the precise cause of the fire. It could have been the empty tank's proximity to other electrical systems, which sparked the ignition when activated. It could even have been a simple static discharge, unrelated to any motorcycle electrical systems.

The one small fortunate aspect of this incident is that it happened at a track, where extinguishers and first responders were available immediately to prevent it from becoming even more serious than it did. This is why it's always a good idea to have a fire extinguisher in your home garage when you're wrenching on your own bike. Ventilation is also helpful to allow gas fumes to escape, something else the Barcelona garage had going for it. Unfortunately, it wasn't quite enough to prevent this incident from happening.