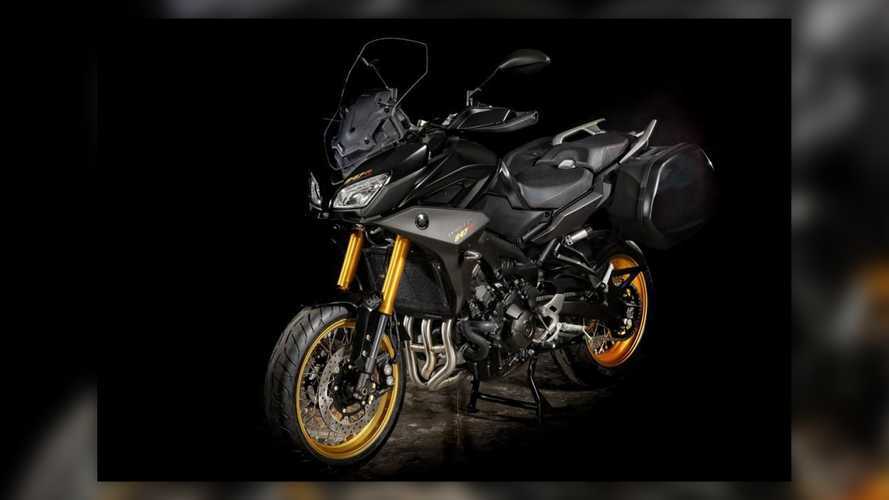 If you want to party like a rock star, here’s your big chance. This Yamaha Tracer 900 GT was customized in Italy for singer Vasco Rossi (no relation to Valentino Rossi, far as we know). The dealer behind the build calls it the Yamaha 847 R, and says you can have one too if you’ve got the cash.

This motorcycle was supposedly designed to mix Japanese engineering and Italian styling; Yamaha bases lots of its European operations out of Italy, so it’s natural to see these cross-cultural experiments there. Well-known builder Oscar Tasso put this machine together, working with D&G Motorsports in the city of Rimini.

Tasso chose to keep his work subtle; from a distance, you might think was a standard Tracer 900 sport tourer. Looking more closely, you can see a set of spoked wheels, with a gold finish to match the bike’s forks. Tasso went with modern spoked wheels, that don’t require tire tubes, just like you’d see on a current-production adventure bike. The matte black paint is another obvious change, and Tasso also bolted on some official Yamaha accessory parts (LED lights, sporty license plate holder, and radiator grill).

Along with the revised look, the 847 R should sound different, thanks to a full Akrapovič exhaust. However, the engine is unchanged. The 847 R has the same liquid-cooled 847cc inline triple as the standard Tracer 900 GT model, as well as the FZ-09 and XSR900. That engine has a great reputation for toughness and reliability, and with 115 horsepower, it’s more than enough for any antics on public roads.

Most people aren’t buying 847 R because they want to hoon around, though—they're buying it because they want a unique machine, as ridden by the rich and the famous. That’s the cool angle with this bike. Usually, when you see a custom motorcycle built for an entertainment star, it’s unobtainable for anyone else. Even if you did want the same motorcycle as Billy Joel or Brad Pitt, and you had the money, you couldn’t buy one. Every rule was made to be broken, though, as this customized Yamaha proves. Chances are, the price tag will still rule out most buyers, but D&G Motorsports hasn’t announced its MSRP yet.