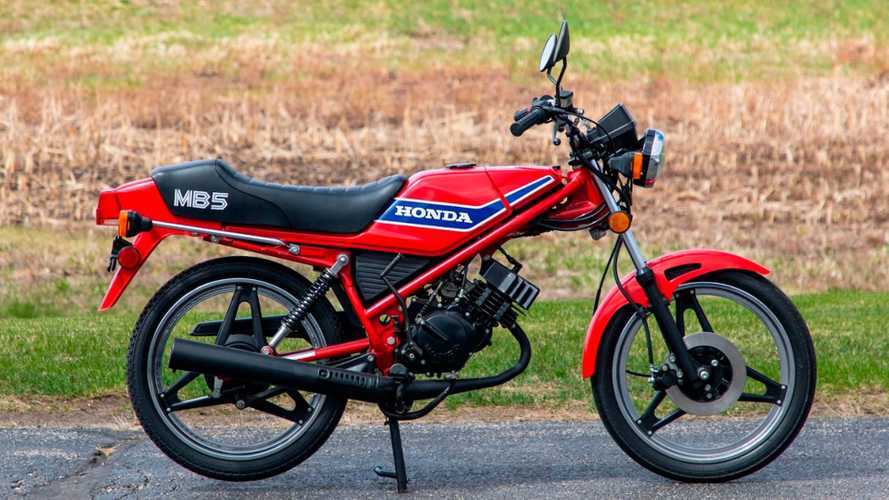 If you want to know why Honda’s motorcycles are so well-respected, you shouldn’t start with the CBR1000 or the Africa Twin or any of its other flagship motorcycles. You should look at its small-capacity machines instead, bikes that are innovative, yet simple that offer cheap and reliable transportation to beginning riders. For many motorcyclists, their trust in Honda started with machines like this 1982 MB5.

This MB5 is a rare example available here in the U.S and will be up for grabs during Mecum’s upcoming Indy 200 auction. Although these bikes were popular in other markets, this sensible two-smoker was only available in the U.S. for a year so you rarely see them on public roads.

The MB5’s counterbalanced, air-cooled, two-stroke, single-cylinder engine made 7 horsepower, and was paired with a five-speed gearbox. There was no electric start, just an old-school kickstarter. CDI ignition was standard, a novel feature for an early-80s beginner bike, and the engine had an auto pre-mix system. You just filled the separate gas and two-stroke oil tanks and the bike would take care of the mixing for you.

The tiny engine meant this bike was only meant to commute in the city and on back roads. Smaller riders can reach speeds of over 50 mph, but any attempt to take it on a proper divided highway would be foolhardy (and possibly illegal, depending on your jurisdiction’s laws).

Like many other 1980s’ two-stroke street bikes, you could have considerable fun if you wanted to modify your MB5. Some enterprising DIYers even use parts from Honda’s CR80 motocrosser into the MT50 and upgrade the engine to a six-speed gearbox. You can also use the dirt bike’s clutch parts, and some riders even manage to integrate the whole engine into the MB5 frame. It takes work, as you’ve got to fit the liquid cooling system, but it has been done.

The bike going up for auction is unmodified. It’s part of the Al Phillips’ collection and while it’s not as exotic as many of the other bikes in the collection, it’s still a cool little pocket rocket. It’s still got the original 18-inch Comstar cast wheels and a disc brake up front—a fancy feature for an entry-level bike in 1982). The brake at the back is a drum and the shocks are preload-adjustable. Everything looks in near-perfect condition and it should be. According to Mecum, this MB5 only has 116 miles on the odometer.

Chances are, this machine will be bought to store away in another collection; a sensible decision, but in a way, it’s also too bad. These small-capacity street bikes were made to be ridden, offering a real motorcycle experience with a moped-sized engine. That’s a recipe motorcyclists in the U.S. will probably never see again.