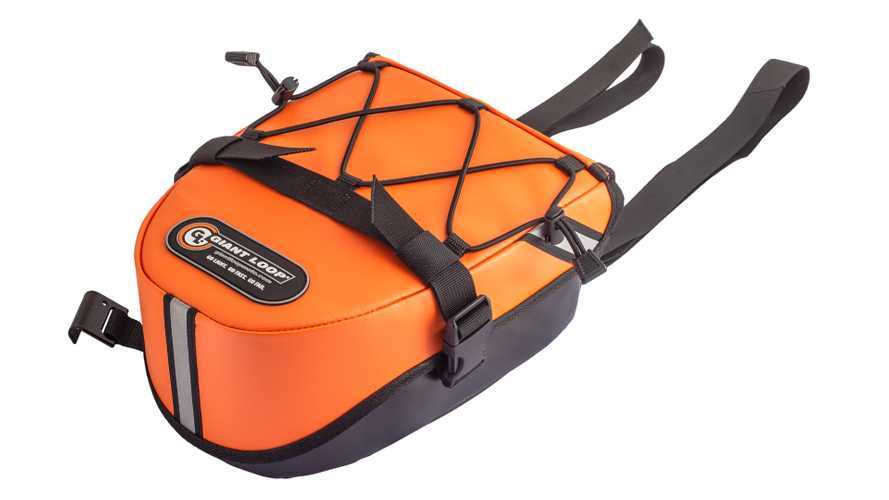 A simple, hard-working bag for on and off the road.

The main upgrade for the 2020 version of Giant Loop’s Klamath tail pack is a new mounting system. It has two stretchy, 25-inch, polyurethane Pronghorn straps to keep it in place, as well as four hooks that clip to the rear fender and two webbing straps that apply forward tension.

Carry All The Things:

MV Agusta Teams Up With Piquadro For Luxury Luggage Lineup

Sometimes, Giant Loop’s products look like a confusing jumble of straps when you first pick them up, but installation isn’t complicated. Hook the webbing straps through the rear subframe or footpeg brackets, attach the hooks to the fender, and wrap the Pronghorn straps around the motorcycle’s rear rack or tail section frame, and you’re ready to go.

Most of Giant Loop’s products are extremely adaptable; they can work with or without a rear rack, allowing you to keep everything lightweight and streamlined. As such, the Klamath Tail Rack Pack (as it’s officially known) is designed to work with Giant Loop’s universal tail rack. It also works with almost any other rear rack or even just a plastic dirt bike fender. Riders can also mount the Klamath tail pack to the top middle section of Giant Loop’s Mojavi saddlebags. While most riders will buy this for off-road bikes, its universal design also works on other styles of motorcycles.

The Klamath can hold four liters and is made of waterproof materials, although Giant Loop only claims the exterior is weather-resistant. For waterproofing, there’s an internal Dry Podliner (another Giant Loop product, basically a lightweight dry bag) to keep dust and water out of your gear. Other features include reflective accents for nighttime visibility, a mesh pocket, and an adjustable shock cord for lashing cargo to the top of the pack. There’s an adjustable divider in the interior, too, with pen/tire pressure gauge loop, key clip, and zippered mesh pocket.

Giant Loop has a $119 MSRP on the updated Klamath Tail Rack Pack; it’s available in black, and if you buy from Giant Loop directly, you can also get it in limited-edition gray and orange. Oh yeah, and if you’re wondering about that Klamath’s oddball name? Like most of the items in Giant Loop’s lineup, it’s named after geography from the west coast of the U.S.—in this case, the Klamath River Basin of southern Oregon and northern California.