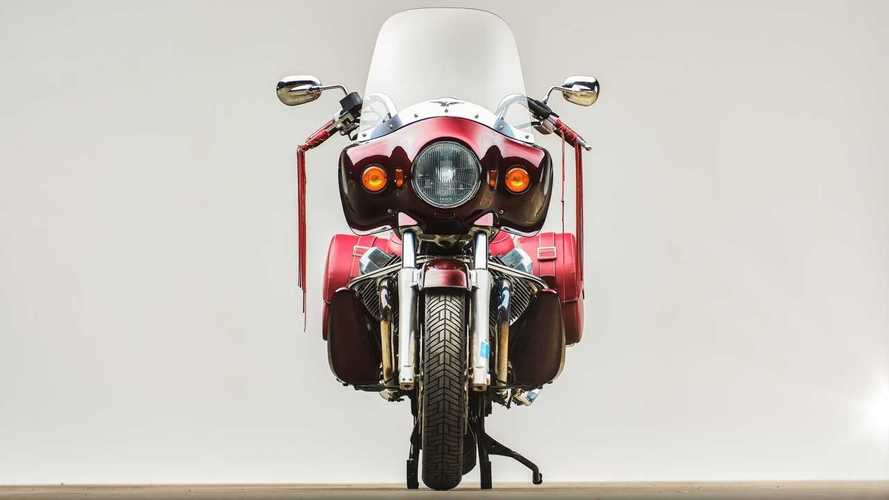 An obtainable piece of California.

California is a weird state (I can say that I’m a native). From the granola munchers in Berkeley to the beach bums in SoCal, many associate the Golden State with a free-spirited and easygoing nature. Since 1971, the Moto Guzzi California has leveraged those connotations for a fully-loaded, go-anywhere touring cruiser.

Originally developed for the Los Angeles Police Department and later used by the California Highway Patrol, the model takes on a different demeanor for the mass market. With leather fringe tassels, a maroon and chrome paint scheme, and red leather seat and saddlebags, the California 1100 EV 80th Anniversary edition was one of the grooviest iterations of the model. Now, an example of the limited-production Moto Guzzi California is up for auction at Bring A Trailer.

Released in 2002, the California 1100 EV 80th Anniversary celebrated Moto Guzzi becoming an octogenarian. To commemorate the milestone, Italian furniture maker Poltrona Frau redesigned the California with a bit more ‘70s flare. Frau wrapped the two-up seat in red leather with a contrasting white stitch, made the panniers easier to transport with leather straps, and tied in the front of the bike with leather-matched grips and tassels.

The pearl-effect paint not only added bling to the California, but was perfectly paired with two-toned chrome inserts on the tank and fenders. A large front fairing and leg lowers provided wind protection for those long rides down the Pacific Coast Highway. An 80th Anniversary decal graced the top of the tank and a placard on the handlebar clamp brands this bike as #187 in the limited-production run.

The California is still rolling on the factory wire-spoked wheelset and both the 17-inch rear and 18-inch front wear Metzeler tires. Beefy 45mm forks and dual hydraulic suspension out back ensure that the new owner’s caboose will be California dreaming on this land barge. Gold-plated Brembo calipers provide the stopping power, clamping down on rotors that also add a touch of California gold to the mix.

The 1,064cc transverse-mounted v-twin pumps out 74 horsepower and 70 lb-ft of torque, and of course, that power is transferred to the back wheel via shaft drive. This particular Moto Guzzi California has 5,000 miles on the odometer and the current owner has only added 1,000 miles since purchasing the bike in 2013. An oil and filter change were performed in preparation for the auction and an owner’s manual will be included in the sale. Apparently, the California was just too far out for the owner as it also comes with a clean Arizona title.

If you’re looking for an old tourer with low mileage and as much character as a vintage Gold Wing, don’t wait long. The current bid on the Moto Guzzi California 1100 EV 80th Anniversary is only $3,200 and the auction ends tomorrow. Put a little California sunshine in your garage, if it’s not too weird for your taste.