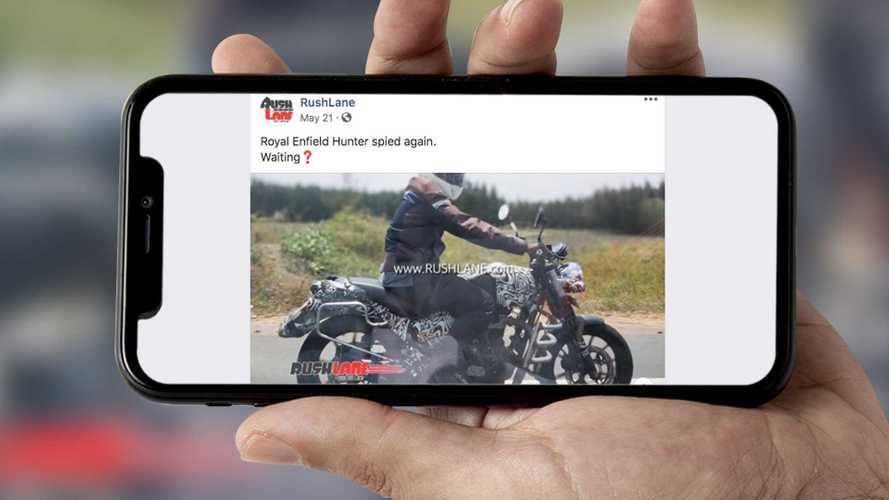 About six months after news first broke that Royal Enfield was trademarking the name ‘Hunter,’ we now have some indication of what the Indian moto stalwart may be doing with it. A RushLane reader named Akshay Nandakumar spotted a camouflaged Royal Enfield test mule somewhere along the Chennai-Trichy highway in Tamil Nadu, India that gives several clues.

In Nandakumar’s shots, there are a few things that immediately stand out. There’s a gigantic round chrome headlight, and big steel crash bars in a sort of cage formation at the front. Instead of a long, chrome exhaust, this bike has an abbreviated, stubby, matte black canister. No spoked wheels here, either, in favor of some cast wheels instead, the design of which isn’t immediately clear from these shots.

In Other Royal Enfield News:

The engine looks to be the same as the one in the upcoming Meteor 350, so it’s reasonable to extrapolate that this bike will come after it. Both the tail and the headlight are LEDs, and there’s a single round instrument pod up front. Indian motorcycle media is skeptical about whether this truly is the Hunter, codenamed “J1D,” or something else.

Is this what RE was talking about when it mentioned creating slimmer, lighter-weight bikes aimed at attracting young riders and/or women? That’s about as clear as the mud you’d hopefully find enjoyable to ride through on a Himalayan, so we can’t possibly speculate about it at this time. It’s also not clear whether those crash bars would be fitted to this bike as it might be sold in showrooms in the future, or whether they’re simply an additional effort by the company to camouflage the finished bike design from prying eyes.

We can guess with reasonable certainty that the finished version of this bike will be introduced after the Meteor officially makes its debut, whenever that happy date arrives. Could it be the Hunter? It could, or it could be something else entirely that remains to be seen.