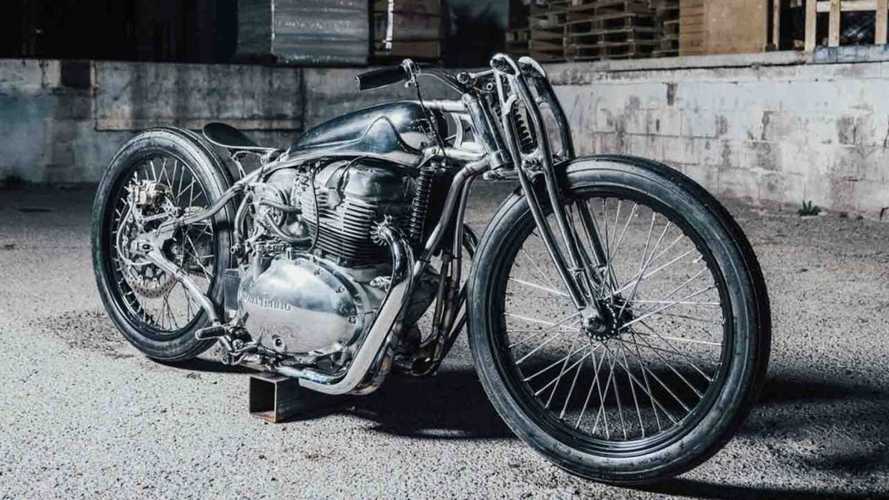 A stunning custom with looks reminiscent of vintage boardtrack racers.

Royal Enfield is considered as one of the oldest motorcycle manufacturers still in existence today. Starting life in England over a hundred years ago, the now-Indian manufacturer has been tagged as the oldest global motorcycle manufacturer still in continuous production. Tapping onto the brand's undoubtedly rich history, Royal Enfield came up with the Custom Program for a range of models in 2016. This was done in order to inspire Royal Enfield owners and enthusiasts to get creative with their bikes. Given the fact that a vast majority of motorcycle disciplines of today were born out of hacking and bodging old motorcycles decades ago, who knows what the future holds with all the advancements in technology today right?

That being said, custom motorcycles are better known for the way they pay homage to the rich history of motorcycling. As seen in the bike featured today, the fact that it started life as a Royal Enfield Continental GT 650 is unbelievable, given its amazing transformation. Built by Cristian Sosa of Sosa Metalworks, this custom machine was inspired by boardtrack racers from the early 1900s. Boardtrack racing was one of the earlier forms of motorcycle racing wherein riders would race one another in an oval lined with wooden boards. This then proved to be extremely dangerous with many accidents and quite a few fatalities from both racers and spectators. As such, it eventually transformed into what we now know as flat track racing.

This Honda CB650R Custom Is Ready For A Rally Raid

Dubbed the Kamala, this custom creation was unveiled in Portland, Oregon in February of this year. In fact, it was such a showstopper that it won one of the top awards at the show, despite it not even being a hundred percent complete at the time. As you can see, the bike features completely bespoke bodywork. From the front end, the chassis, tank, and even the lack of front brakes and rear suspension, the only thing remaining from the Continental GT 650 it once was is the engine. The impeccable metalwork was completely hand made by Cristian Sosa, replicating not just the look, but also the fabricating techniques of that era.