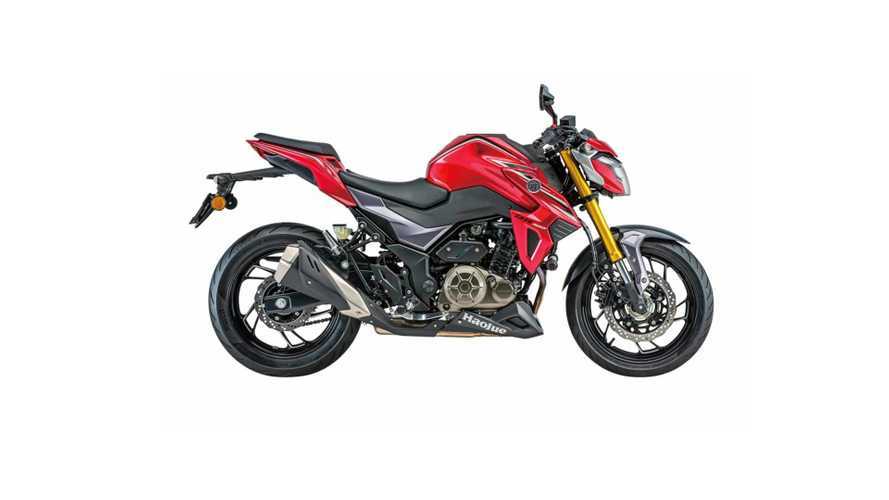 Made-in-China naked bike is an update on the Suzuki GW250 platform.

Haojue, Suzuki’s Chinese partner, just launched the DR300 in its home market. Basically, it’s an upgraded Suzuki GW250, and there are rumors the bike will sell in other countries badged as the Suzuki GSX-S300.

We first learned about the Haojue DR300/Suzuki GSX-S300 at the Chongqing motorcycle show in October, 2018. Since then, Chinese buyers have been very interested in the bike, as it takes the Suzuki/Haojue team-up beyond its usual production of small displacement utility motorcycles. While a 300 would be considered a small machine in western markets, it’s a big-bore bike for most riders in China.

Other Asian markets, especially India, are also excited about the possibility of a new motorcycle that could hold its own against other 300-class machines. The Haojue DR300/Suzuki GSX-S300 might not be on the same level as the Kawasaki Z400 or other bikes in that category, but it could compete with the less-powerful Kawasaki Z250 and similar motorcycles.

Haojue also produced the GW250 for Suzuki, and supposedly had a big hand in designing the new bike. The updated 300 version has a liquid-cooled parallel twin that makes around 28 horsepower. KYB front forks are standard, along with preload-adjustable rear shock, and LED headlight, taillight, and signal lights. The new Haojue DR300/Suzuki GSX-S300 even has Bosch dual-channel ABS, with 298mm front brake disc and two-piston caliper.

That all sounds like the makings of a fun machine, but unfortunately, like its GW250 predecessor, the Haojue DR300/Suzuki GSX-S300 is heavy. Curb weight is supposedly 390 pounds, definitely on the porky side. That’s almost 20 pounds more than a Yamaha MT-03.

Most riders won’t worry too much about the extra weight, though. They’ll be too busy riding, and looking at the 300’s aggressively-sculpted bodywork. Even the headlight has been updated for the production version of the bike, with contemporary streetfighter styling.

Chinese pricing for the Haojue DR300 is 33,080 yuan, which works out to roughly $4,650 USD. Would a Suzuki GSX-S300 come into the U.S. around that price mark? If it did, would anyone buy it? Maybe, maybe not, but this machine does seem to be a big improvement over the GW250, even if it isn’t as sharp as some of the made-in-Japan competition in the 400cc bracket.