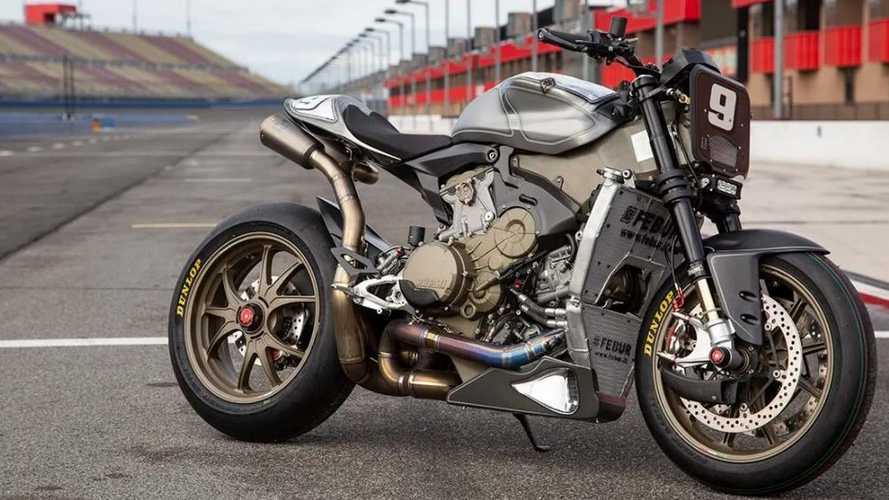 Some motorcycles are better left stock. Whether you’re eyeing a collector’s piece or looking for an ultra-reliable commuter, certain models are meant to be left alone. Many consider Ducati’s 1199 Superleggera one of those bikes. With an MSRP of $65,000, few would dare to change as much as a brake lever on the limited-production Panigale R. Roland Sands isn’t one of those people.

As the owner of an aftermarket parts and motorcycle gear company, Roland Sands can pretty much do what he wants with any motorcycle—and he does. From turning an Indian Chieftain into a board track racer to making a 1974 Yamaha RD400 two-stroke street-legal, the former AMA race champion pulls out all the stops for his custom builds. When Sands got his hands on a 2014 Ducati Superleggera, his intentions were pretty clear.

One of the Superleggera’s main selling points is its reduced weight compared to the standard Panigale. With a magnesium monocoque frame, magnesium wheelset, carbon fiber subframe, and titanium fasteners, it seems like Ducati’s diet plan was more than sufficient. However, Sands believed that the weight savings wasn’t enough. After stripping the Superleggera to its naked form, the builder used aluminum molds to form a carbon fiber gas tank and tail section.

Continuing his quest to shave pounds, Sands decked out the build with carbon fiber handlebars, front mudguard, TFT housing, and caliper ducts. Next, the full-titanium Akrapovic exhaust was shortened to fit snugly under the new subframe, eliminating more ounces from the svelte superbike. The modifications reduced the Superleggera’s 366-pound stock weight to an impressive 337 pounds.

Despite weighing less on the scales, the affectionately named ‘The Super’ looks like it gained muscle due to a burly aftermarket radiator. The Febur oil cooler and race radiator combo helped keep the 1,198cc v-twin operating at maximum capacity. Boasting 186 horsepower and 90 lb-ft of torque in stock form, Sands wisely decided to leave the Bologna-built mill alone.

Without the cover of the Superleggera’s fairings, the build required inventive thinking with the reshaped gas tank housing the electronics. The new number plate doubles as an air intake and hides the GPS module and traction control unit from view. Though Sands decked out The Super in carbon fiber, his retro-leaning aesthetic pushed him to paint the new bodywork in a faux metal finish. Subtle pinstripes and number decals complete the vintage racer-inspired build and bares no semblance to the original model.

For most people privileged enough to purchase a Superleggera, they won’t—and shouldn't— customize it. Of course, most of those people aren’t Roland Sands, and as The Super demonstrates, he does what he wants.