This 1988 BMW R100 GS Is Painstakingly Refurbished To Factory Condition 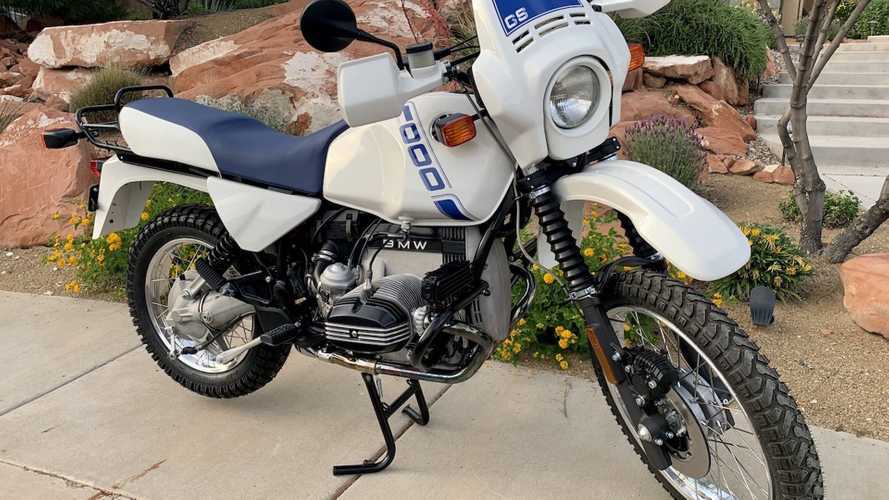 The owner even had the speedometer rebuilt!

If you want a vintage adventure bike that’s in showroom condition, you either need unlimited money or a time machine. Preferably both. Most ADV bikes see some off-road abuse, or at least a tipover in a Starbucks parking lot, and end up battered over time.Thanks to all this abuse, it's hard to find one in mint shape. This 1988 BMW R100 GS is the exception to that rule, however. It’s in pristine condition after a recently completed restoration, and it can be yours if you have the scratch.

The R100 GS is a transitional bike. It debuted in 1987 and took BMW’s adventure line from the hairy-chested days of the R80 G/S (which was basically a dirt bike on steroids) into the modern era of ADV machines. It had more power, more comfort, and more weight than its predecessor, and was clearly designed for long, hard miles. In the late 80s and early 90s, when Europe fell in love with round-the-world travel, this was the machine that hardened adventurers aspired to.

Powered by an air/oil-cooled flat twin engine with two-valve heads, the R100 GS made around 60 horsepower. The boxer mill was five-speed gearbox and got its power to the rear wheel via a shaft drive. This was the last airhead engine BMW used in the GS series, before introducing the R1150 GS for 1999. The times, they were a-changin'.

Like all BMWs, especially airheads, the R100 GS had its quirks That said, it proved to be an extremely reliable machine, capable of hundreds of thousands of miles if maintained properly. However, the example for sale here on Bring a Trailer only has 23,000 miles on the odometer, and it doesn’t even look like it’s seen that. The seller just finished a comprehensive refurbishment of this motorcycle. As per the ad, “A refurbishment completed in 2020 consisted of a repaint in white with blue graphics as well as rebuilds of the top end, transmission, carburetors, wheels, front brakes, and gauges. Additional work included replacement of the tires, handlebar, switchgear, battery, cables, and more.”

Sounds like there shouldn’t be any hidden surprises, then, and the photos sure look clean. It’s not 100 percent stock (aftermarket tach, Thunderchild diode board), but most adventure bikes get a few upgrades over time to improve comfort, performance, reliability, and safety.

The only downside? The price. This auction proves that vintage GS prices continue to rise, as well-preserved machines become harder to find. If you want an old-school BMW adventure bike, you should start looking now, before they become unobtanium.