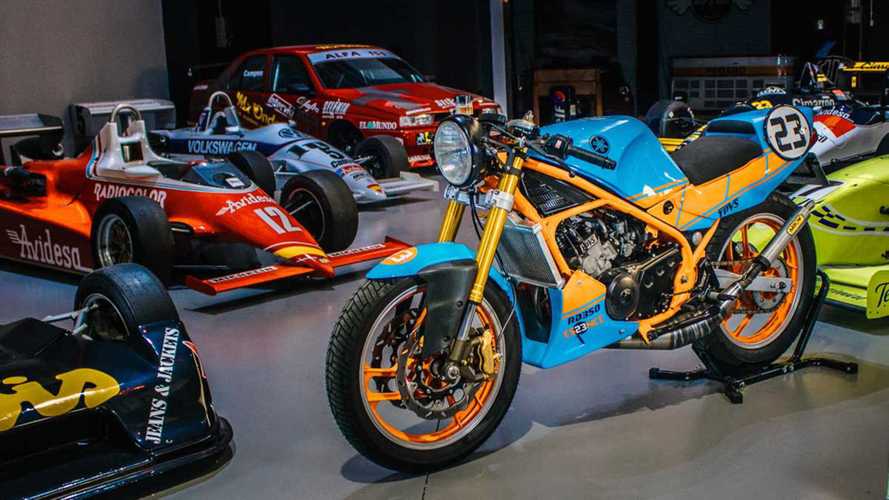 This bike is a classic racer-inspired beauty.

The Yamaha RD350 is considered a legend among classic performance motorcycle enthusiasts. Known for its lightweight and responsive nature, the bike’s most prominent feature was its buzzy two-stroke engine that gave liter bikes of the day a run for their money. Today, the Yamaha RD350 exists but in the memory of its users with increasingly stricter emissions laws forcing the bike out of existence. Several good examples of the RD350 remain, and the bike continues to have a strong following even today.

The cafe racer featured here started life as a Yamaha RD350, whose owner had some very specific things in mind as far as customizing the bike was concerned. As you can see, the bike sports an unmistakable paint job. A livery that hearkens back to the heyday of motorsports. However, beneath the iconic Gulf livery lies so much more, that when put together, truly shows how the bike is worth more than just the sum of its parts.

Feast Your Eyes On This:

Bolt Motor Co. is no stranger to stunning customs that both look and perform extremely well. Commissioned by a close friend of the workshop, the bike’s owner wanted a street bike with the characteristics of a 90s race bike. As a result, the team at Bolt Motor Co. completely rebuilt and redesigned the bike whilst retaining its retro styling. The bike received a ton of custom fabricated parts such as a seat, tail section, and belly pan. Apart from this, the bike’s handling characteristics were greatly enhanced by a Suzuki GSX-R600 front end being transplanted into the frame. Along with the front end, a set of aggressive, low slung clip-ons give the bike even more aggressive ergonomics. A digital EX-02 speedometer and Koso GP tachometer complete the cockpit’s race-inspired aesthetic.

As far as engine performance is concerned, the team at Bolt Motor Co. completely stripped and rebuilt the two-stroke mill. Increasing the displacement and altering its tuning resulted in more power and improved reliability for daily use. A classic Arrow exhaust system was fitted onto the bike to enhance power as well as the sonorous two-stroke howl.

Bolt Motor Co. has quite a number of custom creations that truly show an elevated sense of attention to detail—not just for aesthetics, but for performance as well. Indeed, their customs are so well thought out, that they’re equally at home in a showroom for display, or on a race track shredding lap after lap. For more of their creations, visit Bolt Motor Co. here.