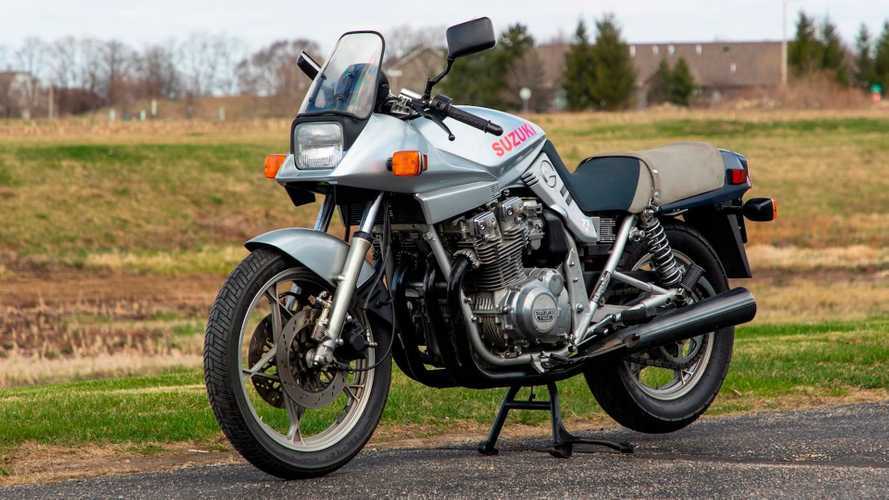 The original Suzuki Katana has a blend of very desirable traits: It’s reliable, it’s powerful, it’s good-looking, and it’s rare. Many of them were ridden hard, though, so it’s getting more difficult to find one in good shape. If you really want to get your hands on a well-preserved specimen, Mecum's upcoming Indy 200 auction might be your best chance.

At its debut, the Suzuki Katana was something new from Japan, a combination of superbike chassis and engine technology with avant-garde aesthetics. Suzuki based the Katana’s mechanics on the GS1100, with its air-cooled, four-stroke, DOHC inline-four engine rated at 105 horsepower and 67.7 foot-pounds of torque. The Katana’s wild styling came from Target Design’s Hans Muth who had worked previously for BMW Motorrad.

The Katana, Then And Now:

Before joining Target Design, Muth had a history of developing heart-stopping superbikes for the Bavarians. He designed BMW’s R90 S, a bike that revitalized the company’s motorcycle division and is still considered an icon. However, when BMW asked him to work on a cruiser with garish faux-gothic trim, Muth left the company and helped found Target. Suzuki signed him to transform the GS into the Katana, and the rest is history.

When the prototype Katana debuted at the 1979 Cologne Motorcycle Show, everyone realized this weird-looking new Suzuki with the evocative name was a revolutionary machine. It was the complete package—handling, power, and (controversial) style. Suzuki had figured out superbike handling, so it went around corners without scaring the rider. The 1100 engine, with four-valve heads, is still considered one of the toughest air-cooled four-cylinders of all time, and it was very powerful for that era. The bike looked every bit as daring as any of the exotic Euro bikes, but you didn’t have the same questions about reliability or parts availability as you would with a Benelli Sei or a Ducati 900 SS.

There were a few detractors, but most motojournos fell in love with the Katana, and it ended up one of the most lusted-after bikes of the 1980s. It won plenty of Best Superbike awards in its day, and it’s still considered one of the most influential motorcycles of all time. The KZ1000 might have blazed a trail for modern-day literbikes, but the Katana was the bike that really paved the way forward.

The bike Mecum is selling is part of the Al Phillips collection. It appears to be in very good condition, and with only 16,559 miles on the odometer, it should have plenty of life left, if you want to ride it on the street. Chances are this bike is headed to another collector, though, with its high-speed days behind it.