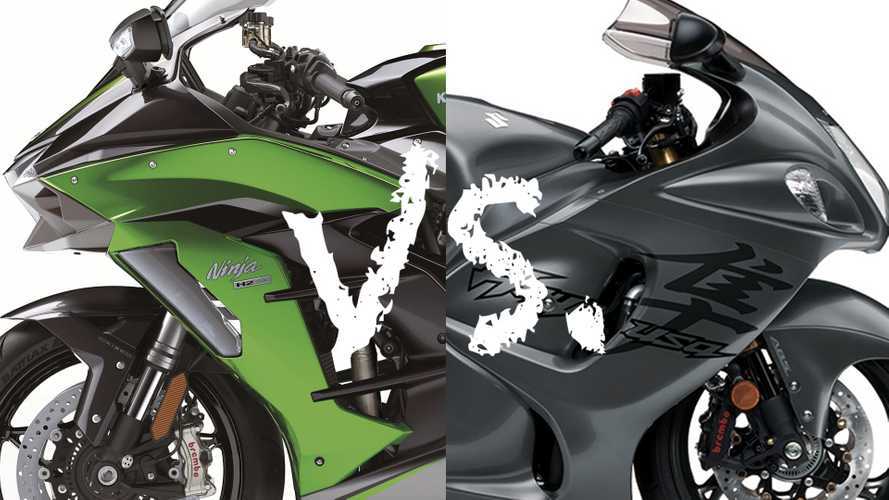 Since the introduction of the Honda CB750 Four in 1969, a bike widely regarded as the first Japanese superbike, manufacturers have been in a never-ending arms race to try and outperform one another. Bigger engines, forced induction, lighter chassis, high-performance materials—motorcycle makers have been creative in the many ways they figured out how to get more power of their bikes. There’s never been such a thing as “too much power” in this race. With fifty years of superbike history, we can’t help but wonder how models at the cutting edge of technology stack up against good old-school sportbike muscle?

So, this week, we decided to pit modern-day performance against legendary brawn by comparing the 2020 Kawasaki Ninja H2 SX SE+ to the 2020 Suzuki Hayabusa. The H2 is one of the most powerful and technologically-advanced road-legal motorcycles currently available on the market. In comparison, the Hayabusa looks like a relic of the late 2000s. Don’t be fooled by its age, though. Despite an aging platform, it still manages to give its contemporary competitors a run for their money. The name Hayabusa has become a synonym of performance and remains to this day one of the most popular names in the segment. Let’s have a look at how they compare on paper.

Watch This Hayabusa Repeatedly Beat An H2 At The Strip
⠀

When you have two names like Ninja and Hayabusa, you can’t do a proper showdown without first discussing the two legendary models’ history.

The Ninja nameplate has been around for almost 40 years and has become Team Green’s go-to convention to identify the products in its sports lineup. Through the decades, there have been countless versions of the Ninja, from the four-cylinder 250 to the popular 650 and 1000. There's been a Ninja in almost every displacement sizes and the family keeps evolving to this day.

The very first Kawasaki model to bear the Ninja badge was the 1984 GPZ900R. The manufacturer already had performance ambitions for the namesake when it introduced its water-cooled 908cc inline four that produced 115 horsepower and could reach a top speed of 156 miles per hour. Those were insane power figures by 80s standards.

Through the following four decades, the stealth badge was applied to countless bikes of all shapes and sizes, from the small four-cylinder 250 all the way up to the big ZX-14R. Then in 2014, Kawasaki introduced a new Ninja flagship to its lineup, the H2. The model immediately stood out as the only supercharged sportbike currently on the market. In 2019, Kawasaki followed up with the H2 SX SE+, an entry-level, travel-friendly, fully-loaded version of the model which is the model we're checking out today.

As for the Hayabusa, the name first appeared in 1999 as a moniker for the all-new GSX-1300R. Suzuki introduced its own superbike in the hopes of stealing the Honda CBR1100XX Super Blackbird’s crown as the most powerful production bike, which it ultimately succeeded in doing.

Surprisingly, while it's 15 years younger than the Ninja, as of now, the Hayabusa is only in its second generation. You read that right: there have only been two generations of Hayabusas in a little over twenty years.

The model's latest generation was introduced in 2007 and while Suzuki has since updated the model to keep it somewhat relevant, there haven’t been any significant changes brought to the table. So much so that it was discontinued in several countries, notably across Europe and in India, because it wasn't compliant with modern emission standards. That’s something we hope will soon change as recent patents suggest Suzuki is working on a new-gen ‘Busa.

Both the Ninja and the ‘Busa are legends in their own rights, not only for their ludicrous, right-out-of-the-factory performance numbers, but also thanks to their membership to the “Speed Record Setter” club.

When it was first introduced, the ‘Busa had no problem climbing up the list of most powerful production bikes on the market to comfortably settle in the top spot. In 2000, it even received the Guinness title of fastest production bike in the world. After all, with a name that translates to “peregrine falcon”—which incidentally is considered the fastest animal on Earth—it only made sense for Suzuki to aim for the top.

20 years later, the ‘Busa continues to rank high on the list of most powerful superbikes on the market though it’s been superseded by a few newcomers, including the Ninja H2. Considering the model runs on a decade-old platform, the fact that it remains so competitive is no small feat. With an output rated at 197 horsepower and a top speed of 186 mph, the Hayabusa is a testament to Suzuki’s (lost) spirit of innovation.

With a few speed records of its own and a power rating of 206 horsepower (326 hp if you’re insane and opt for the track-only H2R), the Ninja H2 is no goody-two-shoes. In 2016, a crew of Turkish madmen set a new speed record when they reached the absolutely bonkers speed of 248 mph in 26 seconds on the H2R (the H2’s racetrack-ready, evil twin).

Then in 2018, Team 38 put an H2 on the salt flats during the Bonneville Speed Week and managed to reach the record-setting average speed of 209 mph. To be specific, the bike actually managed to reach 211 mph on one of the runs—the official number is an average of the two runs recorded, the second of which was slightly slower.

This is where the Ninja and the Hayabusa differ the most: the price point and what you get for your money.

Because the ‘Busa is an aging model, it’s not nearly as refined as its Kawasaki counterpart. It does offer a selection of riding modes and standard ABS but that’s about as high-tech as it gets. No electronic suspension or launch control—the bike has wheels, brakes, and an engine; the rest is all up to you and your skills level.

On the one hand, it creates a very pure sportbike experience that allows you to really get a feel for what the bike has to offer without the intervention of elaborate electronic systems. On the other, the bike is far less forgiving and not as easily approachable as the Ninja. The falcon might peck you in the eye and you might not like it. Combined with the fact that it was once the fastest production bike in the world and you might want to hone your skills before jumping in the saddle.

That’s also reflected in the price—there’s a step $10,000+ difference between the two models. For less than $15,000, you can get your hands on a brand-new 2020 Hayabusa. That makes it one of the most affordable superbikes in the segment. You also only have one choice. If you want a Hayabusa, there’s only one trim-level to choose from so there’s no wiggle room to add features if your budget allows it. What Suzuki does offer, however, is a selection of Genuine Suzuki Accessories to personalize your falcon.

The H2 starts at $25,000 which is pretty much the price of a small car, however, you get a lot of bang for your buck. The SX SE+ comes fully loaded with a slew of features including several proprietary control systems, as well as smartphone connectivity via the Rideology app. While a superbike, the H2 easily turns into a daily commuter when you need it too. It has a pillion seat and electronic features such as cruise control which makes it easy to live with on the daily.

If you're looking for something a little more premium, the standard Ninja H2 can hook you up with a performance upgrade for $29,000—or $32,500 for the Carbon edition. For the ultimate sportbike experience, the track-only Ninja H2R has your back for the modest sum of $55,000 (that’s more than the base price for a BMW 5 Series, by the way.)

The first thing you should consider is your experience level. You have to be honest with yourself because dealing with high-output motorcycles without decent experience doesn't forgive. We don’t mean to scare you or deter you from dreaming a supersport, we’re just saying that the more realistic you are about your abilities, the more enjoyable your experience will be. We're looking out for you!

Once you’ve determined that a superbike is the right fit for you, how do you choose between a Hayabusa and a Ninja H2? The price will likely weigh the heaviest in the balance, especially when there is such a humongous gap in the price points. As we mentioned earlier, however, even though it's more expensive, the Ninja H2 is not only a supercharged beast but it also gets you the full package.

If you seek a brawnier, less-invasive experience, however, $14,700 is a small price to pay to get all the perks of a superbike—especially when it gets you in the saddle of a speed legend. The 2020 Suzuki Hayabusa might be long in the tooth but it remains an aggressive competitor and while the 2020 Kawasaki Ninja H2 SX SE+ youngling is perfectly able to give it a run for its money, the falcon continues to soar and to pack a punch.