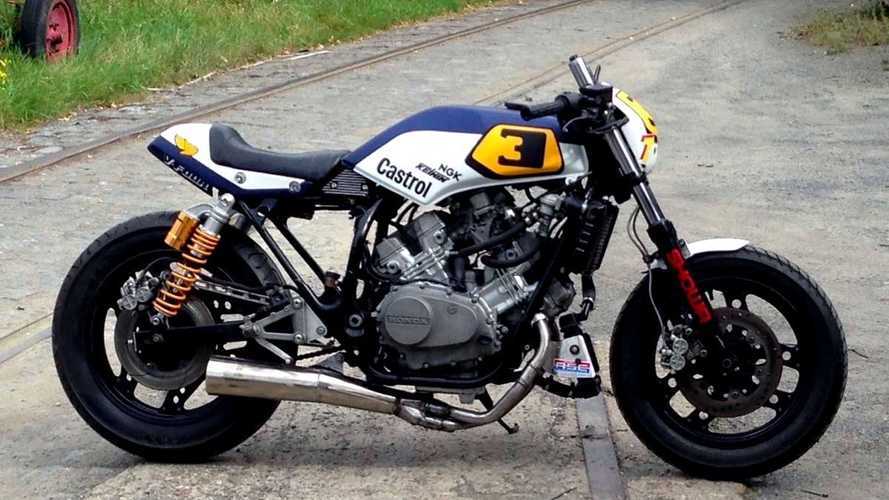 Does it still qualify as a cruiser?

Honda introduced its revolutionary new liquid-cooled V4 engine platform in the early ‘80s. The VF series engines powered everything from the 1,100cc V65 Sabre to the 500cc Interceptor throughout the decade. Marketed as the “most powerful midsize custom” at the time, the VF500C—also known as the Magna V30—brought Honda’s latest V4 mill to the cruiser segment.

While the VF500C’s soft suspension made the midsize cruiser ill-equipped for handling sharp comers, the 498cc motor punched above its weight. The four-stroke, dual-overhead-cam, 90-degree V4 packed 4 valves per cylinder and an 11:0:1 compression rate to pump out a respectable 68 horsepower and 32 ft-lb of torque. With the VF motor at its core, it’s no surprise that Nick Xiromeritis of ANX Prototypes chose to turn the Magna V30 cruiser into a rugged road racer.

As an automotive designer, Xiromeritis has traveled the world to work with companies like Renault and Mazda. That background helped him collaborate with Jens vom Brauck of JvB Moto on a long-running project bike. Choosing the Magna V30 for its 430-pound wet weight, the team set out to create an ‘80s era race bike.

“Honda’s RSC (Racing Service Center) was designed to support privateer racing teams and it became the inspiration for this build,” said Xiromeritis. “At the time Honda was just starting with their V4 design and came up with 6 motor variations of the VF before developing the iconic VFR and RC30 machines. My idea was to create a bike that had the look of a ‘barn find’ ex-racing RSC machine developed for road races like the Isle of Mann TT.”

Attacking the build in phases, Xiromeritis first set his sights on the Wheels and Waves show in Biarritz, France. The initial show informed Xiromeritis of the LED headlight issues and underdamped shock set up borrowed from a V65. For the Bike Shed show in Paris, the team addressed the problems and updated the exhaust and paint as well. The two shows provided motivation for Xiromeritis to continuously work on the VF500C, but that work still isn’t done.

Other issues led to the builder sourcing a low-mileage Interceptor engine, swapping in an NS400R swingarm, and installing a set of 41mm forks from a VTR1000. Along with the radiator and exhaust from a VF750, footrests off a Caviga Mito, and a Kawasaki AR125 gas tank, we’re unsure if there’s much left of the VF500C.

Xiromeritis put it best when he said, “The most challenging aspect of this build was its perpetual evolution.” Yeah, the Magna V30 is still a chopper after all.