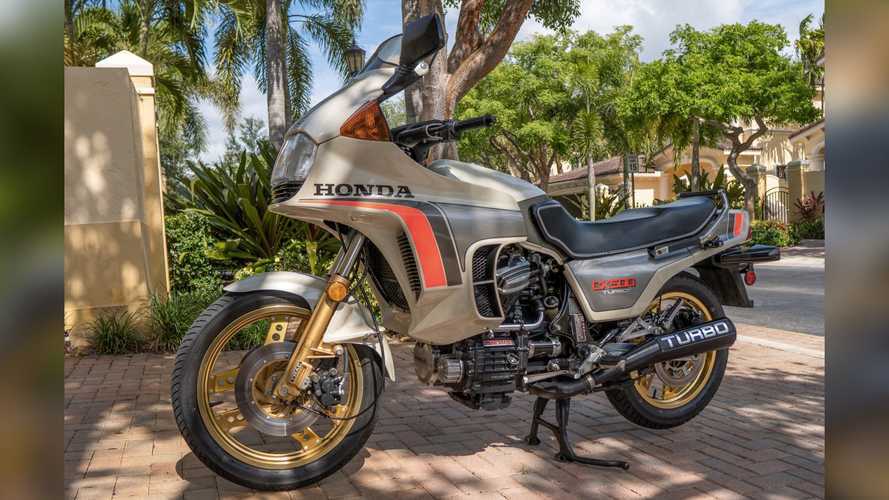 This Plastic Maggot is on steroids.

Nowadays, almost all the motorcycle manufacturers on the market offer one, two, or twenty V-twin motorcycles. From Harley’s Milwaukee-Eight and Indian’s PowerPlus to Ducati’s 90-degree L-twin, V-twins are widespread and popular. You'd be hard-pressed to find a company that doesn't have at least one V in its lineup.

Modern-day twins are usually laid out parallel to the motorcycle frame, with both cylinders aligned—this allows the bike to remain relatively narrow, no matter how big the cylinders are. Some manufacturers got creative, however, and decided to play around with their engine layout. The most famous one is Moto Guzzi’s transversal V-twin, an unusual set up for a bike. Did you know that before opting for more traditional engine layouts, Honda also made an attempt at a transversal V-twin? That’s how the Honda CX500 came to be in 1978.

What’s so particular about the CX is that not only are the cylinders positioned at an 80-degree angle from one another, they are also slightly twisted outward by 22 degrees so that the engine isn’t too large. The engine layout, combined with an underwhelming silhouette, resulted in a bike reviewers and buyers alike took a while to warm up to. The model eventually gained a favorable reputation for being virtually invincible.

Naturally aspirated, the 497cc V-twin produces around 48 horsepower. Honda attempted to perk up the offer by continuously improving the “Plastic Maggot” through the years and in 1982, the CX500 series culminated with the introduction of the CX500 Turbo. The forced-induction engine produced a healthy 82 horsepower, almost double the base engine’s output. With 580 pounds to haul, the engine sure needed the extra help. Ultimately, a new 674cc engine replaced the 497 unit in 1983 before the CX was altogether discontinued. Thus endeth the ballad of the Honda CX.

Because I bought a 1979 CX500 as a project bike, I’m always a little excited to see one pop up on an auction site. This 1982 CX500 Turbo looks to be in beautiful condition and is the only one of its kind (not the bike specifically, the model). There are no other generations or model-year out there: if you want a turbocharged CX500 specifically, a 1982 is all you can get.

In my opinion, this bike is the ultimate CX500. Not only did the CX turbo benefit of four years of evolution and improvements, but the turbocharger adds the pep the base engine lacks. If you have a soft spot for the weird 80-degree and 22-degree V-twin, this is likely the best version of the 500 models you can own.

This model only has 14,000 miles on the counter seems to be in great shape. It features a pearl white with red and grey accents livery, gold anodized 18 and 17-inch wheels, and it even comes with the original owner’s manual. The bike was even serviced in January 2020 and looks just about ready to get this riding season started.  So, who wants to join the CX club? We have cookies and we talk about how quirky our bikes are.