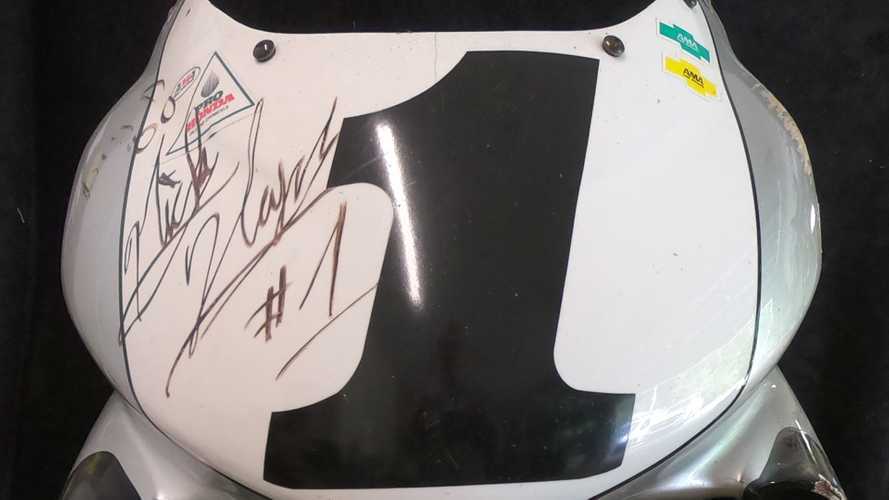 This section of crashed-out bodywork bears the Kentucky Kid's signature from his AMA days.

Were you a big fan of Nicky Hayden’s racing career? Were you devastated by his death in 2017? If so, and if you want to help the foundation that honors his memory, now’s your chance. One of Hayden’s former race mechanics is auctioning off an autographed fairing from one of Hayden’s bikes, salvaged from a long-ago wreck.

Hayden was one of the most successful American racers in the past 20 years, and the last Yankee to win a MotoGP championship. He died in a traffic incident in 2017, when a car driver struck him while Hayden was training on his bicycle in Italy.

Hayden, commonly known as the Kentucky Kid, came from a family of racers, but Nicky was by far the most successful. His roadracing career started with the Central Motorcycle Roadracing Association when he was still in school, and he was racing superbikes before he graduated from 12th grade.. His career progressed quickly, as he moved on to AMA racing and won the AMA Supersport championship as a privateer at age 18. He also found time to clean up some AMA flat track wins in there, as well.

In 2002, he won the AMA’s Superbike championship, then moved on to ride with Honda’s MotoGP factory team in the mid-2000s. Hayden started as Honda’s #2 guy, as Valentino Rossi was the team’s star. By 2006, Hayden's solid work earned him the championship. He never won the title again—not another MotoGP race, even—but for years, he was one of only a handful of American riders in the international racing scene, and U.S. fans loved him for it.

Now, one of Hayden’s former mechanics is selling off a cool piece of memorabilia. This Honda CBR600 fairing was in the garbage can after Hayden crashed at the start of the 2000 AMA SuperSport 600 race. The eBay seller was visiting Hayden’s garage, retrieved the trashed fairing, and asked him to sign it. He’s had it ever since, and now wishes to sell it and donate the money to the Nicky Hayden Memorial Foundation. Not only can you get your hands on a cool piece of Hayden’s racing history, you’re helping out too—sounds like a win-win deal!