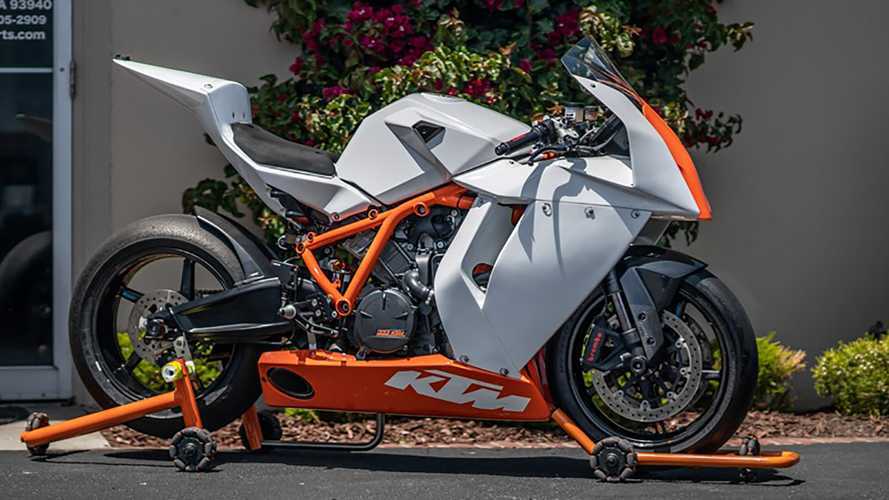 We normally tend to associate the name KTM with capable dual-sport bikes and twitchy streetfighters. Despite having a MotoGP factory team and four RC16 race bikes entered in the championship (two RedBull KTM Factory, two RedBull KTM Tech3), the Austrian manufacturer never truly sought to apply its track formula to a street-legal sportbike.

It did, however, make a feeble attempt at entering the superbike segment in the late 2000s. KTM launched the RC8 in 2008 and called it the first ever “Made in Austria” superbike. Two years and 8,000 units later, the model evaporated from the market. Despite positive reviews on the road and a string of successes on the track, changing WorldSBK regulations forced the project back to the drawing board which eventually pushed KTM into MotoGP’s arms instead. The RC8 was left behind and eventually forgotten.

The model was thought, planned, designed, and engineered to be a 1,000cc champion. When the WSBK announced a new 1,200cc limit, KTM was suddenly confronted with the RC8’s limitations. Increasing the displacement to meet the new requirements was going to be a challenge as the bike was designed to be the perfect liter bike—no less, no more.

Despite its demise, the 1190 RC8 R was a masterpiece of power and refinement, so obviously, when this 2011 race-spec unit showed up on Bring a Trailer, we had to share it with you. After all, the seller claims that this is one of the only 20 KTM RC8 R produced for the U.S. market.

This particular model isn’t road-legal—getting your hands on it will mean having a track day beast to show off at the next event. It runs on a 1,190cc V-twin rated at 180 horsepower teamed with a six-speed transmission and a quick-shifter. The description adds that the engine features a dual spark plug set up that fires only one of the two plugs below the 7,000rpm mark.

The bike features an Akrapovič exhaust, BST carbon fiber wheels, Dunlop radial racing slick tires, clip-ons, and folding clutch and brake levers. Support is provided by WP while the brake hardware is signed Brembo with a pair of 320-mm discs with dual monoblock calipers at the front and one 220mm disc paired with a two-piston caliper at the back.

This beauty is located in California and is currently up for grabs. It comes with a racing tank lid, crash pads, paddock stands, and a California bill of sale. As one of the site's users commented on the RC8's auction page, “Screw the murder hornets, this is how I want to go.” That's our mood right there.