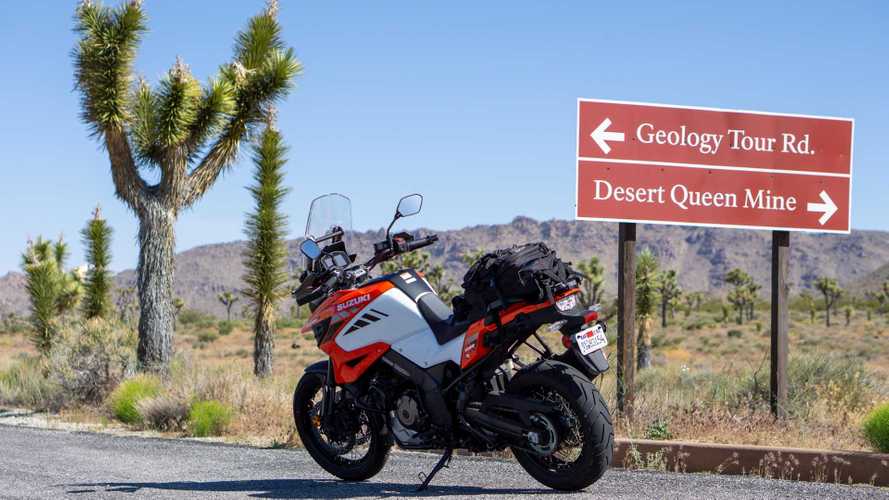 Adventure is something you have to seek out. We seldom find it just sitting on our doorstep. Whether it’s a journey to the far-flung corners of the globe or a jaunt to the nearest National Park, chances are you'll be traveling a considerable distance in pursuit of adventure.

With that said, any adventure bike should come equipped to handle the open road. From interstate highways to wind-swept backroads and everything in between, adventure riders have to pound the pavement before reaching more remote regions. When it came time to assess the new V-Strom 1050’s long-distance capabilities, we figured that covering 1,000 miles in one day would thoroughly test the newest Suzuki’s adventurous spirit.

After weeks of preparation, procrastination, and trepidation, I set out for the 1,000-mile voyage at 2 am on a Saturday in late May 2020. Accompanied by two buddies, the early departure was supposed to help us avoid riding through the night two times in the span of 24 hours (more on that later), but the after-dark temperatures forced us to bundle up under several layers until dawn. Of course, the V-Strom's wind protection also helped shield me from the early morning chill as we worked our way down to San Diego on Interstate 5.

The V-Strom's windscreen, featuring two inches of adjustability, drastically reduced the turbulence in the cockpit. Though the wind defection didn't create a still rider bubble, the wind only danced off the top of my helmet and shoulders with the screen raised to its highest setting instead of knocking me around. Once the route sent us through stretches of desert, that airflow would actually benefit me.

As we exited the I-5 and merged onto Interstate 8 East, I could feel the temperature drop. Consulting the LCD dash confirmed the chilling conditions as we headed inland. From Alpine to Pine Valley, the temps dipped from the low-50s into the 30s, and the first place you notice those frigid temps is in your hands.

While the V-Strom's handguards did a laudable job of keeping direct windblast off my digits, the overall chill eventually pierced my full-leather gauntlet gloves. If you’re planning on exploring the northernmost latitudes or riding deep into the night, it might be worth outfitting the 1050 XT with heated grips or moving up to the 1050 XT Adventure.

Once we stopped in El Centro for a fill-up, the sun crested over the faraway hills. Soon I was removing layers and preparing for the unforgiving desert heat. With the 5.3-gallon tank filled to capacity, we set out for the Salton Sea. On the backroads, the V-Strom loped along with no qualms. The removable rubber inserts on the footpegs, damper weights in the handlebar, and the smoothly paved Highway 111 made the ride into the sunrise even more enjoyable.

Past the barren shores of the Salton Sea, our route diverged from the 111 and snaked through the biggest surprise of the ride—Box Canyon Rd. The best parts of any adventure are usually the unplanned ones and this lonely two-lane through a desolate landscape was a highlight of the thousand-mile ride. If we had the luxury of extra time, this would have been a perfect testing ground the V-Strom's off-road chops, but we were already behind schedule and I’ll save that for a more dedicated review.

Once inside Joshua Tree National Park, the mercury really started to rise. The Suzuki still kept its cool thanks to a 15-percent increase in the radiator’s capacity. On the move, the 90-degree v-twin consistently delivered smooth power and didn’t start throwing heat onto my legs until we reached the most inhospitable reaches of the desert. To combat the rising temperatures between 29 Palms and Baker, I stood on the pegs to relieve my legs of the engine heat and take on more airflow.

At Baker, we realized that we were further behind schedule than we initially anticipated. Our original route had us going through Death Valley and Lake Isabella before returning to Los Angeles, but the heat and fatigue were already setting in. With 500 miles to go, we decided to shift plan to munching miles on the interstate and make up for the lost time.

We set out to finish the final 500 miles with re-fueled tanks and a renewed resolve. On the freeway, the V-Strom 1050 XT’s new cruise control was a lifesaver. If you’ve ever set cruise control in a car, you’ll be able to figure out Suzuki’s system without instruction. By activating the button on the right-hand control, users can set and increase/decreasing the cruising speed with the rocker-style switch on the left-hand control. Thanks to the uncluttered roadways, we were able to maintain a manageable pace for the rest of the trip.

Cruise control not only kept us moving at a steady clip but also alleviated the built-up tension throughout my body. Over time, the strain in my wrist moved up to my bicep before spreading to my shoulder and ultimately residing in my neck. There were entire legs of the journey where I set the cruise control, sat back, and let the V-Strom practically drive itself. Resting my throttle hand also allowed me to cycle between several seating positions as the hours of riding took its toll on my posture.

While the addition of cruise control is by far the best new feature on the V-Strom, the updated seat doesn’t promote long stints in the saddle. The flat profile and stiff padding sufficed for the first 400 miles but I eventually resorted to a form of motorcycle Pilates for the last 600. Luckily the V-Strom's spacious cockpit, crash-bar, and footpegs provided enough options to constantly find novel seating positions. Though the stock seat aligns with the 1050’s DR Big-inspired aesthetic, you may want an air cushion, sheepskin cover, or aftermarket seat for the long haul.

Once we conquered the Grapevine and descended back into Los Angeles County, we could taste the finish line. The sun set as we returned to the city limits and I had to navigate Los Angeles freeways in the dark for a second time despite leaving early to avoid it (oh well). For me, covering 1,000 miles in 19 hours was a test of physical and mental endurance. For the V-Strom, it was practically a walk in the park.

No major mechanical issues, no electronic mishaps, and no issues with the Bridgestone Battlax tires occurred throughout the entire ride. The 1050 XT performed as well as on mile 1,016 as it did on mile one. The 1,037cc engine purred along at 70 mph in sixth gear at 4,000 rpm or it growled at 80 mph in third. For those that think the V-Strom's 90-degree v-twin is bland, I would take this engine's compliant demeanor and readily available power over most motors with more “character”.

Over the course of 1,000 miles, The Suzuki averaged around 40 miles per gallon. Of course, the speedier sections saw the mpg decline to the high-30s while the slower portions boosted the average to the low-40s. Would I do 1,000 miles in one day again? Probably not. Would I take the V-Strom on more long-distance travels? Certainly. With a few minor additions like heated grips and a plusher saddle, you could have a full-fledged tourer that’s capable of seeking out any new adventure.