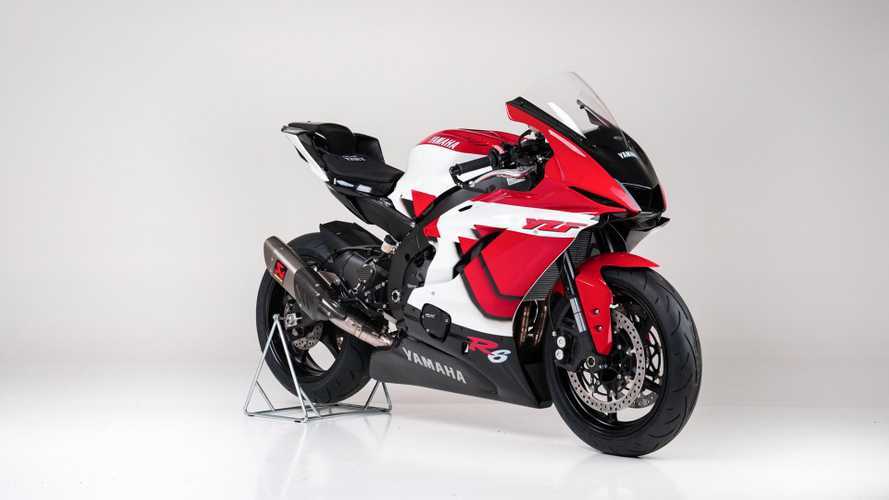 Yamaha is throwing a birthday party for one of its most successful bikes—the R6 In some markets, Yamaha is selling a 20th anniversary edition of its midrange supersport. However, the bike isn’t much different from the standard model, and if you do the math, Yamaha’s anniversary edition seems a bit late.

In the last week of May, 2020, Yamaha Austria Racing Team (YART) introduced the special-edition R6 for the European market (only available through YART, says its Facebook page). Back in 2019, Yamaha showed off the bike in Japan, which makes more sense, as the R6 was actually a 1999 model, and that would line up with the 20th-anniversary commemoration.

Watch A Yamaha R6 Go From Street To Race-Ready

It’s not something worth getting too worked up over, because the 20th anniversary bike is not really much different from the standard model—it gets a red-and-white commemorative paint scheme, but there's no mention of anything else. There is an Akrapovič muffler in the photos, some carbon-fiber bling, a solo seat, and a brake lever protector, but the Facebook post doesn't say anything about trick suspension or engine mods. You’ll pay a lot more for it, though. The special-edition R6 has a 19,999-Euro price tag. That works out to roughly $22,200 USD; in the US market, a standard Yamaha R6 is priced at $12,199.

It’s all a bit of an apples-and-oranges comparison, as EU market pricing and U.S. pricing will always have discrepancies, but at least you can see this is a very expensive makeover. Not that it matters anyway; at this point, Yamaha hasn’t announced the 20th anniversary bike for American buyers. It’s not on the Yamaha website, and there’s been no press release saying we should expect it.

Although the 600cc supersport class has faded in popularity in recent years, the R6 has proven to be a survivor. In the early 2000s, it was one of the machines that took 600s from all-round usage to a more sport-focused design.

It’s been competitive in race series around the world. Other machines might look better on paper, but the R6 is the bike of choice for many privateers, winning national and international championships in the past two decades. Its last update came in 2017, when Yamaha added traction control, riding modes and ABS, as well as new suspension and front brakes and chassis parts.